Just over 20 years ago, the dotcom bubble burst, causing the stocks of many tech firms to tumble.

Some companies, like Amazon, quickly recovered their value – but many others were left in ruins. In the two decades since this crash, technology has advanced in many ways.

Many more people are online today than they were at the start of the millennium. Looking at broadband access, in 2000, just half of Americans had broadband access at home. Today, that number sits at more than 90%. 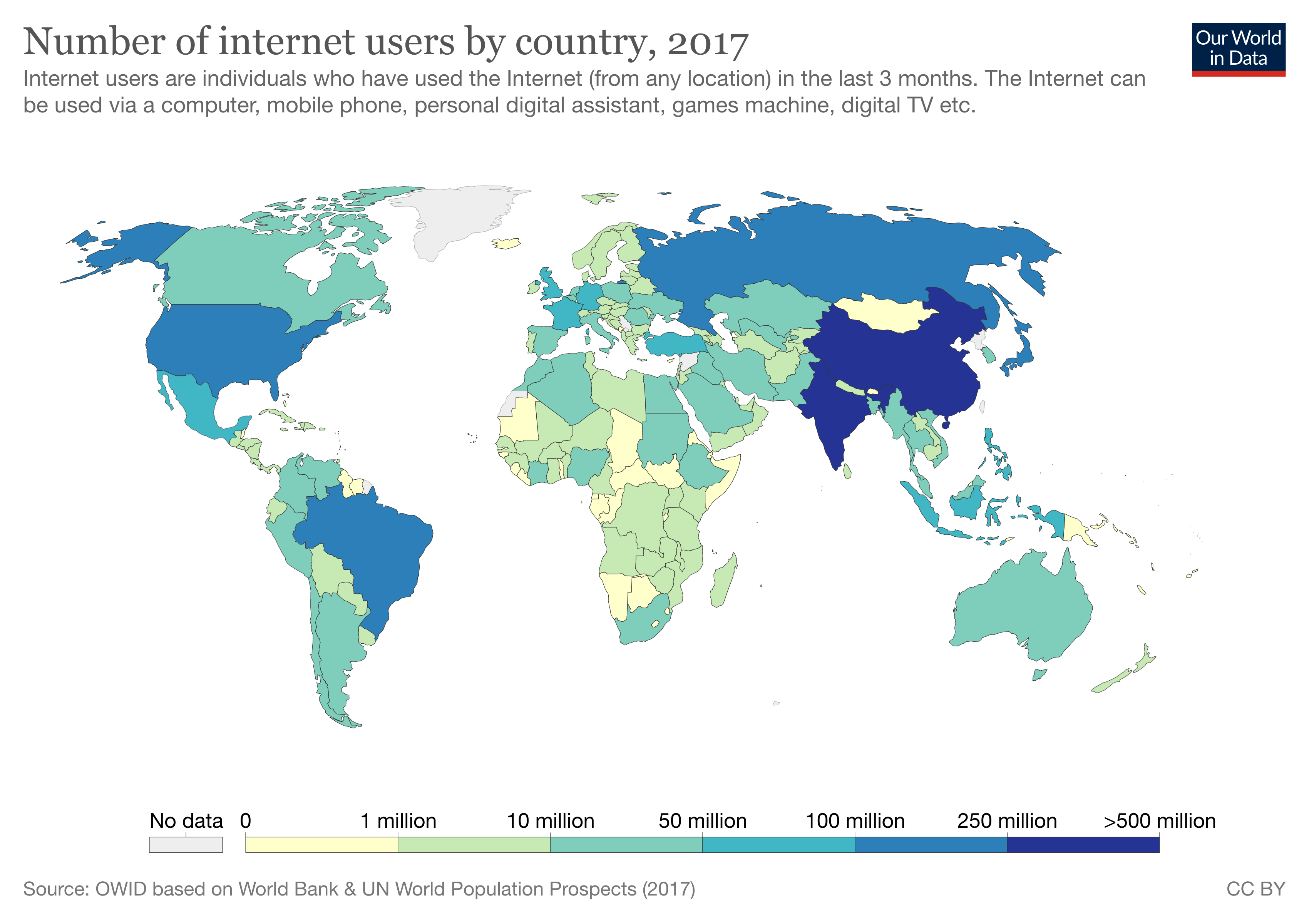 More than half the world’s population has internet access today (Image: Our World in Data)

This broadband expansion was certainly not just an American phenomenon. Similar growth can be seen on a global scale; while less than 7% of the world was online in 2000, today over half the global population has access to the internet.

Similar trends can be seen in cellphone use. At the start of the 2000s, there were 740 million cell phone subscriptions worldwide. Two decades later, that number has surpassed 8 billion, meaning there are now more cellphones in the world than people

At the same time, technology was also becoming more personal and portable. Apple sold its first iPod in 2001, and six years later it introduced the iPhone, which ushered in a new era of personal technology. These changes led to a world in which technology touches nearly everything we do.

Technology has changed major sectors over the past 20 years, including media, climate action and healthcare. The World Economic Forum’s Technology Pioneers, which just celebrated its 20th anniversary, gives us insight how emerging tech leaders have influenced and responded to these changes.

The past 20 years have greatly shaped how and where we consume media. In the early 2000s, many tech firms were still focused on expanding communication for work through advanced bandwidth for video streaming and other media consumption that is common today.

Others followed the path of expanding media options beyond traditional outlets. Early Tech Pioneers such as PlanetOut did this by providing an outlet and alternative media source for LGBTQIA communities as more people got online.

Following on from these first new media options, new communities and alternative media came the massive growth of social media. In 2004, fewer than 1 million people were on Myspace; Facebook had not even launched. By 2018, Facebook had more 2.26 billion users with other sites also growing to hundreds of millions of users. 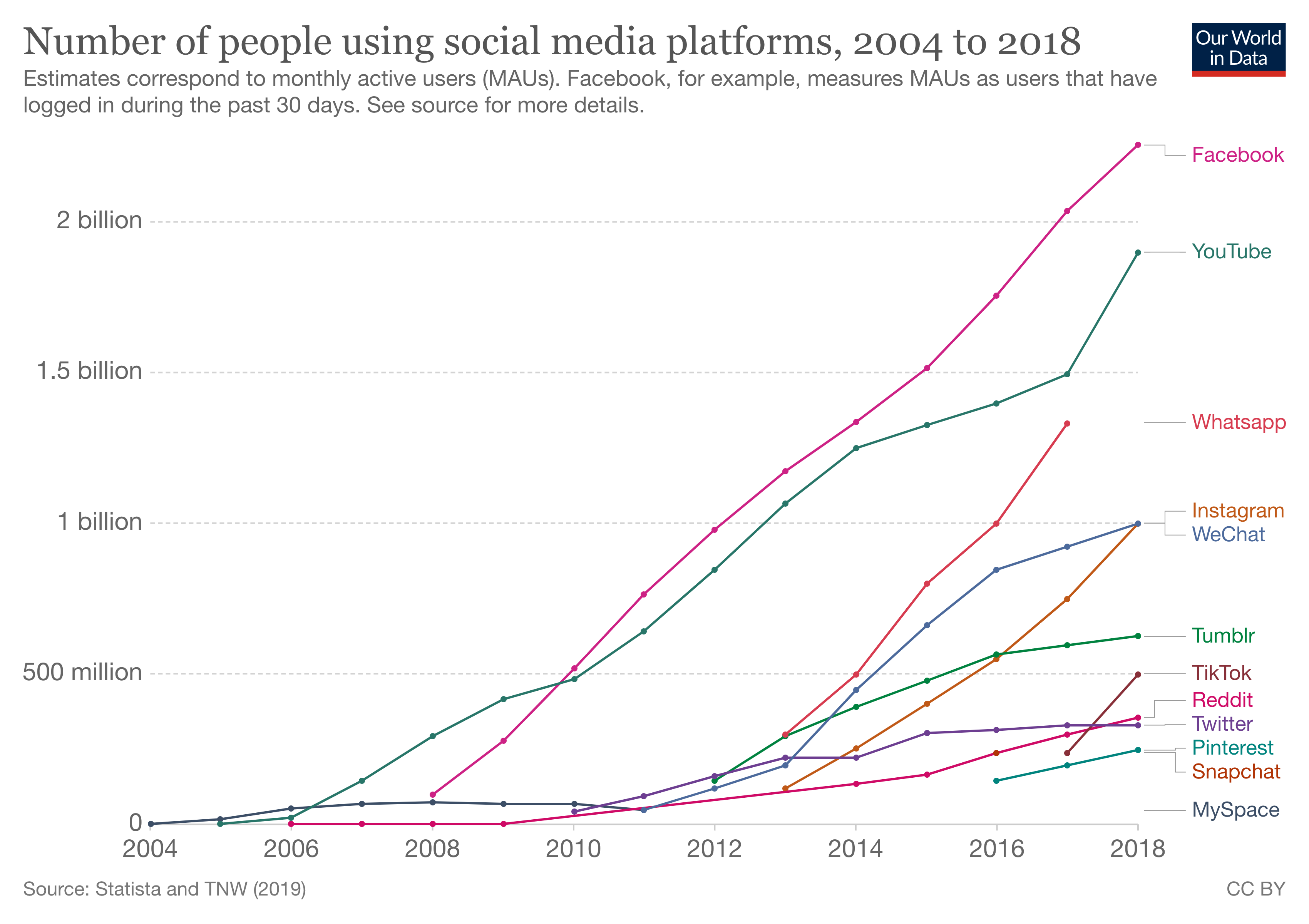 The precipitous rise of social media over the past 15 years (Image: Our World in Data)

While these new online communities and communication channels have offered great spaces for alternative voices, their increased use has also brought issues of increased disinformation and polarization.

Today, many tech start-ups are focused on preserving these online media spaces while also mitigating the disinformation which can come with them. Recently, some Tech Pioneers have also approached this issue, including TruePic – which focuses on photo identification – and Two Hat, which is developing AI-powered content moderation for social media.

Many scientists today are looking to technology to lead us towards a carbon-neutral world. Though renewed attention is being given to climate change today, these efforts to find a solution through technology is not new. In 2001, green tech offered a new investment opportunity for tech investors after the crash, leading to a boom of investing in renewable energy start-ups including Bloom Energy, a Technology Pioneer in 2010.

In the past two decades, tech start-ups have only expanded their climate focus. Many today are focuses on initiatives far beyond clean energy to slow the impact of climate change.

Different start-ups, including Carbon Engineering and Climeworks from this year’s Technology Pioneers, have started to roll out carbon capture technology. These technologies remove CO2 from the air directly, enabling scientists to alleviate some of the damage from fossil fuels which have already been burned.

Another expanding area for young tech firms today is food systems innovation. Many firms, like Aleph Farms and Air Protein, are creating innovative meat and dairy alternatives that are much greener than their traditional counterparts.

The early 2000s also saw the culmination of a biotech boom that had started in the mid-1990s. Many firms focused on advancing biotechnologies through enhanced tech research.

An early Technology Pioneer, Actelion Pharmaceuticals was one of these companies. Actelion’s tech researched the single layer of cells separating every blood vessel from the blood stream. Like many other biotech firms at the time, their focus was on precise disease and treatment research.

While many tech firms today still focus on disease and treatment research, many others have been focusing on healthcare delivery. Telehealth has been on the rise in recent years, with many young tech expanding virtual healthcare options. New technologies such as virtual visits, chatbots are being used to delivery healthcare to individuals, especially during Covid-19.

Many companies are also focusing their healthcare tech on patients, rather than doctors. For example Ada, a symptom checker app, used to be designed for doctor’s use but has now shifted its language and interface to prioritize giving patients information on their symptoms. Other companies, like 7 cups, are focused are offering mental healthcare support directly to their users without through their app instead of going through existing offices.

The past two decades have seen healthcare tech get much more personal and use tech for care delivery, not just advancing medical research.

In the early 2000s, many companies were at the start of their recovery from the bursting dotcom bubble. Since then, we’ve seen a large expansion in the way tech innovators approach areas such as new media, climate change, healthcare delivery and more.

At the same time, we have also seen tech companies rise to the occasion of trying to combat issues which arose from the first group such as internet content moderation, expanding climate change solutions.

The Technology Pioneers’ 2020 cohort marks the 20th anniversary of this community – and looking at the latest awardees can give us a snapshot of where the next two decades of tech may be heading.

Reprinted with permission of the World Economic Forum. Read the original article.

Tags
global developmenthistoryinnovationinternetmediatechnology
In this article
global developmenthistoryinnovationinternetmediatechnology
Related
The Past
Riddle solved: Why was Roman concrete so durable?
An unexpected ancient manufacturing strategy may hold the key to designing concrete that lasts for millennia.
The Past
How Egypt became one of the world’s richest nations during the 18th dynasty
Wealth concentration among elites was common in ancient nations, but the scale on which it took place in Egypt’s 18th Dynasty was unprecedented.
High Culture
The French art critic who saved Johannes Vermeer from total obscurity
Without Étienne-Joseph-Théophile Thoré, the genius of the Dutch painter Johannes Vermeer would have been lost to time.
The Past
How biologist and artist Ernst Haeckel defrauded and hijacked science
He was also a eugenicist — but at least he could draw pretty pictures.
The Past
Only the richest ancient Athenians paid taxes – and they bragged about it
The Athenian rich paid their taxes because they craved the social success of being perceived as “useful.”
Up Next
Life
NOAA discovers a new, beautifully weird sea creature
Exceptionally high-quality videos allow scientists to formally introduce a remarkable new comb jelly.