Skip to content
Who's in the Video
Derek Beres
Derek Beres is a multi-faceted author and media expert based in Los Angeles. He is the Head of Content Marketing and Community at Centered and co-host of Conspirituality. You can[…]
Go to Profile
The Future
Watch William Gibson predict internet culture way back in 1997
The famed science fiction author coined the term "cyberspace" before it existed.
▸
with
Derek Beres

In 1996, William Gibson published the second book of his Bridge trilogy. Idoru tells the story of Colin Laney, who has the uncanny ability of quickly sorting through massive amounts of data in order to recognize “nodal points”—a skill Gibson claims requires a “non-rational process” of identifying “bits of the literal future right here.” Here, biography and fiction clash, as the author wrote a bit of himself into the character.

When Gibson was interviewed for the BBC program, The Net—the network’s five-year exploration of emerging technologies—host Benjamin Woolley claims most futurists get numerous details wrong, citing 1984, 2001, and Brave New World as examples.

Woolley’s claim could have just been premature. The late media theorist, Neil Postman, wrote the prophetic Amusing Ourselves to Death in 1985. In it he claims that everyone thought we were going to see an Orewellian future, but it turned out to be much more Huxleyan. The basis of his work is that we have not been imprisoned by the state so much as our own ceaseless drive for constant distraction and pleasure. As his son, Andrew, writes about his father’s work:

“An Orwellian world is much easier to recognize, and to oppose, than a Huxleyan,” my father wrote. “Everything in our background has prepared us to know and resist a prison when the gates begin to close around us … [but] who is prepared to take arms against a sea of amusements?”

Maybe Woolley couldn’t have foreseen the widespread dispersal of smart phones and the pleasure addicts they would create. He qualifies his above statement, however, claiming that these authors weren’t writing about the future, but the present—a sentiment that segues to Gibson. 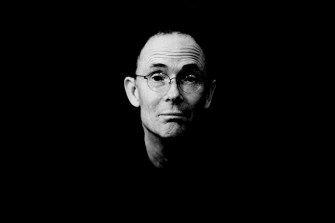 During the interview, Gibson comments on celebrity culture, an essential aspect of Idoru. In the book, SlitScan is the infotainment organization that exists to destroy media personalities; Colin Laney is a former employee. Who could possibly imagine a society in which massive amounts of data are mined to discover pain points to expose celebrities, politicians, and other public figures?

Gibson was informed by his own minor celebrity when penning Idoru, which he called “homeopathic doses” when compared to “rock stars.” Still, he observed a massive shift in what we term “celebrity” on the horizon.

The digitalization of media will change the nature of celebrity in the future. I wouldn’t hazard a guess as to how exactly that would happen. I think the most important difference with the internet and world wide web is that they’re not top-down hierarchical structures on the order of broadcast television.

Even then Gibson recognized a power shift occurring in who would thrive in the emerging digital landscape.

A really talented and determined fifteen-year-old can create a website in his bedroom that’s a more entertaining environment than something a multinational entertainment conglomerate might come up with, and in fact that happens rather consistently. The good ones tend to be put together by kids and the ones put together by major corporations are rather dull and behind the curve.

The heart of this interview revolves around Gibson’s coining of the term “cyberspace,” from his breakaway 1984 debut, Neuromancer. Turns out he wrote that book on a typewriter, envisioning what the awesome power of computers would become. It just so happens that his book was published the same year the first Macintosh personal computer was made available to the public.

Gibson claims that he got it wrong in that Orwellian year. He had envisioned the world wide web as a corporatized prison, not a vehicle for exchanging recipes with relatives in West Germany or other seemingly benign personal uses. In 1996, true decentralization of information seemed right around the corner.

When I wrote Neuromancer, there was effectively no internet to extrapolate from. The cyberspace I made up isn’t being used in Neuromancer the way we’re using the internet today. In Neuromancer, it’s all corporate, effuse cybernetic car thieves skulking through it attempting to steal tidbits of information. In my later work, I’ve had to deal with what the internet has become.

Yet again: too soon. Tear down one corporate structure another comes rushing in. Net neutrality remains a serious threat to the democratization of information and power online. Our data is being shared and sold in increasingly troublesome ways. We can still share recipes with German relatives, yet those ingredient lists are its own cottage industry. Mention spätzle within earshot of Alexa and expect an assault of pasta ads to dominate your browser.

Hoarding information in hopes of discovering “nodal points” has become a lucrative occupation for corporations. Gibson was certainly not wrong in his assessment, it just took a little longer than he expected. As he notes in 1997:

We’re still in the phase where computation is still a sort of middle class pastime. Given the market forces driving the computer industry, we’ll see it spread through the whole society. It should fairly soon, I think it would evolve into something like television to the extent that it penetrates every level of society.

Gibson claims all of his work centers on uncovering the “unintended consequences of new technologies.” He does not believe fear to be the appropriate course of action, however, an interesting observation given how information is used to drive political fearmongering today. His suggestion is more nuanced, requiring foresight that many don’t seem equipped to offer given where we’ve ended up.