This article was first published on Big Think in May 2021. It was updated in November 2022. 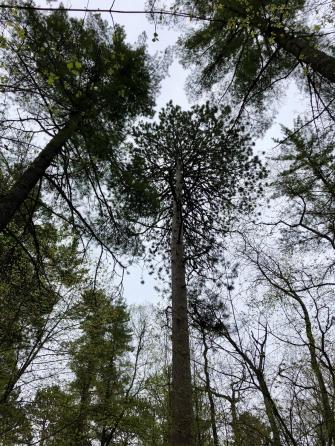 Vanishingly rare, but it exists: a patch of Minnesota forest untouched by the logger’s axe.Credit: Dan Alosso on Substack and licensed under CC-BY-SA

The trees here tower a hundred feet above the forest floor — a ceiling as high as in prehistory and vanishingly rare today. That’s because no logger’s axe has ever touched these woods.

Pillars of the green cathedral

As you walk among the giant pillars of this green cathedral, you might think you’re among the redwood trees of California. But those are 1,500 miles (2,500 km) away. No, these are the red and white pines of the “Lost Forty” in Minnesota. This is the largest single surviving patch of old-growth forest in the state and a fair stretch beyond. And it’s all thanks to a surveying error.

Despite its name, the Lost Forty Scientific and Natural Area (SNA) is actually 144 acres (0.58 km2) in total. Still, it’s an easily overlooked part of the Chippewa National Forest, which sprawls across 666,000 acres (2,700 km2) of north-central Minnesota. And that – being easily overlooked – is kind of this area’s superpower.

And today’s woods are different. They’re not just younger; the original pine stands have been harvested and largely replaced with aspen and birch. 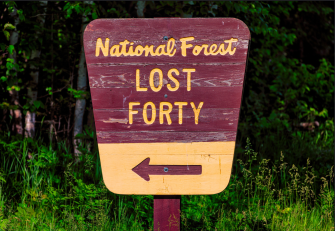 To the moon and back

White pine especially was in heavy demand during the lumbering boom that had Minnesota in its grip by the 1840s — a boom driven by an insatiable demand for building materials and supercharged by the steam that powered the saws and the rails that transported the goods to market.

The two decades flanking the turn of the 20th century were the golden age of lumbering in Minnesota. At any given time, 20,000 lumberjacks were at work in the woods, a further 20,000 in the sawmills, and another 20,000 in other lumber-related industries.

Production peaked in the year 1900, with over 2.3 billion board-feet (5.4 million m3) of lumber harvested from the state’s forests. That was enough to build 600,000 two-story houses or a boardwalk nine feet (2.7 m) wide, circling Earth along the equator. From then on, yields declined, albeit slightly at first. By 1910, however, the first lumber operations started packing up and moving on to the Pacific Northwest and elsewhere.

Minnesota’s era of Big Timber symbolically came to an end with the closure of the Virginia and Rainy Lake Lumber Company in 1929. At that time, a century’s worth of lumbering in Minnesota had produced 68 billion board-feet (160 million m3) of pine — enough to fill a line of boxcars all the way to the moon and halfway back again.

Now spool back a few decades. It’s 1882, and the Public Land Survey is measuring, mapping, and quantifying the wilderness of northern Minnesota — and its as yet unharvested north woods. Setting out from the small settlement of Grand Rapids, Josias Redgate King leads a three-man survey team 40 miles north, into the backwoods.

Their job, specifically, is to chart the area between Moose and Coddington Lakes. And they mess up. Perhaps it’s the lousy November weather, the desolate swampy terrain, or both. But they make a serious mistake: their survey stretches Coddington Lake half a mile further northwest than it actually exists. As happens surprisingly often with mapping mistakes, the error becomes cartographic fact, undisputed for decades.

The area is marked on all maps as being under water and is therefore excluded from the considerations of logging companies. Only in 1960 is the area re-surveyed and the error corrected. But by then, as we have seen, Big Timber has moved on from the Gopher State. 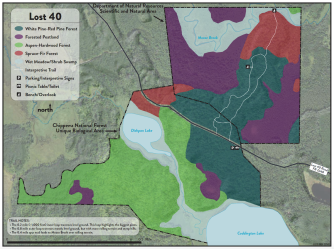 Incidentally, Josias R. King was more than the mismapper of Coddington Lake. He has another, and rather better, claim to fame. When the Civil War broke out, Minnesota was the first state to offer volunteers to fight for the Union. At Fort Snelling, Mr. King rushed to the front of a line of men waiting to sign up.

So it was said, with some justification, that he was the first volunteer for the Union in all of the country. During the war, he attained the rank of lieutenant colonel. After, he returned to his civilian job, surveying. Because of his credentials as the Union’s first volunteer, he was asked to pose for the face of the bronze soldier on the Civil War monument which was unveiled at St. Paul’s Summit Park in 1903.

The loggers’ loss is nature’s gain

But back to the Lost Forty. The loggers’ loss — hence the name — is actually nature’s gain. The SNA’s crowning glory, literally, is nearly 32 acres of designated old-growth red pine and white pine forest, in two stands, partially extending into the Chippewa National Forest proper. (In fact, much of the mismapped area seems to fall within the Chippewa National Forest Unique Biological Area adjacent to the Lost Forty.) Old-growth forests represent less than 2 percent — and designated old-growth forests less than 0.25 percent — of all of Minnesota’s forests.

The oldest pine trees in the Lost Forty are between 300 and 400 years old, close to their maximum natural life span, which is up to 500 years. Similar pines in other parts of the National Forest are harvested at between 80 and 150 years for pulp and lumber. As a result, the pines in the Lost Forty are not only higher than most of the surrounding woods but also bigger with a diameter of between 22 and 48 inches (55 to 122 cm). One of the biggest has a circumference of 115 inches (2.9 m).

With their craggy bark, massive trunks, and dizzying height, these trees look like the ancient beings they are. And they exist in a cluster the size of which is unique for the Midwest. There’s nothing lost about these trees; in fact, it’s rather the reverse. Perhaps the area should more precisely be called the “Last Forty.” 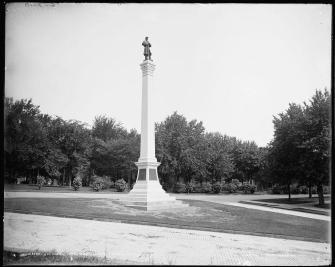 At 52 feet, only half as high as an old-growth white pine: Josias R. King’s likeness atop the Soldier’s Monument in Summit Park, St. Paul. Credit: Library of Congress

Get a good look at the Lost Forty in this videoof the local hiking trail.

Tags
environmenthistoryplants
In this article
environmenthistoryplants
Related
The Past
Riddle solved: Why was Roman concrete so durable?
An unexpected ancient manufacturing strategy may hold the key to designing concrete that lasts for millennia.
The Past
How Egypt became one of the world’s richest nations during the 18th dynasty
Wealth concentration among elites was common in ancient nations, but the scale on which it took place in Egypt’s 18th Dynasty was unprecedented.
High Culture
The French art critic who saved Johannes Vermeer from total obscurity
Without Étienne-Joseph-Théophile Thoré, the genius of the Dutch painter Johannes Vermeer would have been lost to time.
Life
Is winter as miserable for animals as it is for us?
If dogs are out in coats and boots, how are the squirrels feeling?
The Past
How biologist and artist Ernst Haeckel defrauded and hijacked science
He was also a eugenicist — but at least he could draw pretty pictures.
Up Next
Thinking
What is Mahāyāna Buddhism? A scholar of Buddhism explains
Mahāyāna is the most popular type of Buddhism in the world today.