On September 17, 1970, Jimi Hendrix awoke at the Samarkand Hotel in Notting Hill, London, in the basement flat where his German girlfriend Monika Dannemann was staying. At around 2 p.m., they had tea in the hotel’s garden and Monika took some snaps of Jimi with ‘Black Beauty,’ his favorite Fender Stratocaster guitar. Those were the last pictures ever taken of him.

Later in the afternoon, the couple went out – visiting local hipness hotspot Kensington Market, an antiques market in Chelsea and Jimi’s suite at the Cumberland Hotel, near Marble Arch. They had tea and wine at a friend’s flat, argued and made up, and went back to the Samarkand Hotel, where they had a late meal, drank a bottle of wine and Jimi wrote a poem titled ‘The Story of Life.’

Well after midnight, Hendrix went to a party, where he took some amphetamine. Dannemann showed up at the party, and around 3 a.m. the couple returned to the Samarkand. Unable to sleep, Jimi took nine of Monika’s sleeping pills (the recommended dose was half a pill). When she awoke that morning, she found him unresponsive and covered in vomit. Around noon of the 18th of September – exactly 50 years ago today – Jimi Hendrix was pronounced dead.

The last stanza of the poem he wrote the night before reads:

The story of life is quicker than the wink of an eye.

The story of love is hello and goodbye.

Until we meet again.

Amid the initial confusion surrounding his death, the poem was mistaken by some for a suicide note. Several subsequent investigations have provided nothing but indications of an accidental death. 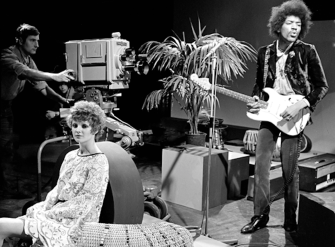 In the States, Hendrix had made a name for himself as a band guitarist, playing for both Little Richard and Ike Turner. Not an undividedly positive name: he got fired from both of those bands. His own career – as a solo artist, and as the leader of the Jimi Hendrix Experience – only took off when he moved to London.

The graph above connects over 450 dots, one for each gig he played. It shows the amount of hard work Hendrix put into his career, and how it paid off – after criss-crossing Northwestern Europe, but mainly England, his fame hops back across the Atlantic and becomes transcontinental. A few samples from his gig database: 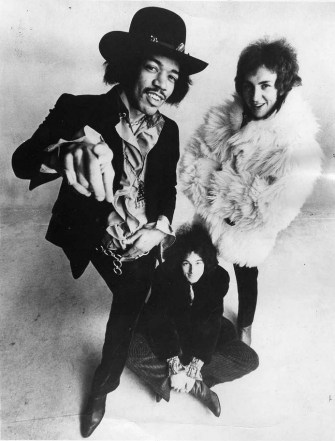 This bit of ‘fan art’ was created by Owen Powell, who points out that “it’s not an academic study of Jimi Hendrix’s movements, more a visualisation of the data mapped in sequential order.” So if he flew home between gigs, that’s not recorded here.

The Jimi Hendrix ‘gigograph’ reproduced with kind permission from Mr Powell. Check out his twitter and his website.

Tags
deathmapsmusic
In this article
deathmapsmusic
Related
High Culture
“Global Jukebox” database uncovers secrets from the history of music
We don’t know when or how music was originally invented, but we can now track its evolution across space and time thanks to the Global Jukebox.
The Past
The hobbies of 5 great geniuses
Albert Einstein played a mean violin.
Thinking
Lobsters don’t die from old age — they die from exhaustion
Being mortal makes life so much sweeter.
Neuropsych
Here’s why you should put your “calling” on hold to pursue a more “sensible” career
When your passion becomes your day job, sometimes the day job becomes a chore.
High Culture
How Bob Dylan used the ancient practice of “imitatio” to write songs
Because Dylan “samples and digests” songs from the past, he has been accused of plagiarism. But imitatio isn’t the same.
Up Next
The Future
Airspeeder’s ‘flying car’ racers to be shielded by virtual force-fields
Welcome to the world’s newest motorsport: manned multicopter races that exceed speeds of 100 mph.