Skip to content
Who's in the Video
Robert M Sapolsky
Robert M. Sapolsky holds degrees from Harvard and Rockefeller Universities and is currently a Professor of Biology and Neurology at Stanford University and a Research Associate with the Institute of[…]
Go to Profile
Life
Your brain makes moral judgements—and it may be making mistakes
Ever heard a story that made you sick to your stomach? There is neurological wizardry at work that makes our sense of morality so visceral—and flawed.
▸
5 min
—
with
Robert M Sapolsky

Have you ever witnessed something that made you sick to your stomach? Have you listened to a story so evil that you felt you might faint? Humans are different from other animals because we have a mind for symbolism. This knack for metaphor complicates our lives, and that is evident at a neurological level. Robert Sapolsky, professor of biology and neurology at Stanford University, explains that our insular cortex evolved to teach us to feel disgusted by things that would harm us: the taste of rotten fruit, the smell of infection—those triggers set off a visceral reaction (like nausea, gagging, vomiting). Gradually, our societies developed a concept of moral transgression but evolution didn’t keep pace. Rather than evolve a new brain region to process moral disgust, it was (and is) funneled through the insular cortex. Our bodies can’t tell the difference between moral and visceral disgust, which is why we very often mistake things that are strange to us as things that are bad or immoral. This explains why people are so judgmental about alternative lifestyles, and feel confident labelling other people’s decisions as “wrong” and theirs as “right”. Awareness of this misattributed impulse reaction can hopefully help us pause and think beyond our faulty wiring. Our moral instincts may be seriously flawed. Robert Sapolsky is the author of Behave: The Biology of Humans at Our Best and Worst. 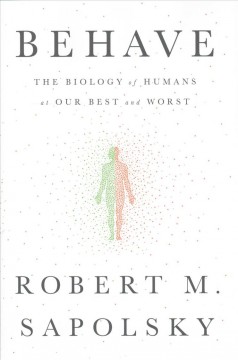 Robert Sapolsky: We think metaphorically. We think in parables. We think in ways that are unrecognizable to other species. And that’s maybe 50,000 years old, right around the time that our ancestors started doing things like throwing pigment on the walls of a cave and this pattern of colors stands for an animal, stands for painting, cave paintings. The first sign that this is not a horse, this is a picture of a horse. And that was an incredible leap forward.

So we’re this symbolic species and our brain does this unbelievably fancy symbolism. But the interesting thing is, it actually doesn’t do it all that well. And it has to do with the fact that 50,000 years is a blink of an eye in evolutionary terms. In 50,000 years, you invent all these abstract sort of concepts. You invent the notion of a moral transgression. A baboon could be pissed off at another baboon who’s bitten him and chase him as a result but he doesn’t frame it as a moral failure. This moral transgression business is very new.

So how’s the brain going to do something like that in the eye-blink of 50,000 years? And you see all sorts of interesting improvisations. For example, there’s this part of the brain called the insular cortex, the insula. Any normal, run-of-the-mill mammal bites into a piece of food that’s rotten and rancid and toxic, the insular cortex activates, triggers all sorts of reflexes: you gag, you feel nauseous, you spit it out, whatever. A great way to avoid being poisoned by rotten food.

Human bites into rotten food, exact same thing. That’s what the insula is for. But then you do something different. Now sit down somebody and ask them to describe to you a time they did something totally rotten and skeevy to somebody else, or hear about some horrible moral transgression and "here’s this heartless robber baron that’s repossessing this elderly woman’s kidney dialysis machine". Some horrible, morally appalling act, and the insular cortex activates and you feel disgusted by what that person—hey, when you get to humans, this part of the brain that detects toxins in your tongue does moral disgust as well. A-ha, so that tells you a couple of things. It tells you why you could be so morally appalled by something that you feel nauseated by it. Hearing about that makes me feel sick to my stomach. Having done that leaves a bad taste in my mouth. I just feel I need to wash my hands of having done that. "Out, out, damned spot."

So it tells you something about intermixing the metaphors there. It tells you something about evolution. When we came up with this moral transgression disgust we didn’t invent a new part of the brain. In some ways: "Hey, insular cortex... that does disgusting food. Moral disgust? I don’t know, that vaguely sounds sort of like that. Hey, somebody give me some duct tape, I’m going to strap moral disgust onto gustatory disgust. The insular cortex does that now." What's the most interesting thing about that though is, at the end of the day, if this neuron in your insular cortex activates because this food is fetid and disgusting, and activates because you’re hearing about an act that was morally reprehensible, if it can’t tell the difference, we have trouble telling the difference between visceral disgust and moral disgust.

And thus you see things like, we mistake things that are viscerally very, very strange with being viscerally wrong. Ooh, they eat different stuff than us. They dress in different ways. They pray differently. That’s not just different, that’s wrong, wrong, wrong. We mistake feeling disgusted by something as being a good litmus test for deciding what’s right and wrong. And what we know is, somebody’s disgusting "this is simply wrong" is somebody else’s perfectly normal loving lifestyle. And it’s tempting if your stomach is in a total uproar, you know, if it makes you puke you must rebuke. We mistake the strength of those visceral responses for abstract moral judgments.

So it’s a very interesting intertwining. The part of the brain that tells you something about if this is hot or cold plays a role in judging: does somebody have a warm or cold personality? If you were sitting in a hard chair versus a soft, cushy one you were more likely to judge somebody as having a hard, inflexible personality. Whoa, this symbolic, metaphorical stuff is so cool and so human and fancy—but we have trouble telling the difference. Somebody else’s pain can feel just as painful as your pain because it’s the same part of the brain that’s processing both.

Up Next
Fact vs. fiction: How facts are made, and who decides what’s true
▸
7 min
—
with
Katherine Maher
Related
3 steps to cure your money anxiety
We’re afraid to talk about money–and that costs us.
▸
7 min
—
with
Kathleen Burns Kingsbury
The Well
Tyler Cowen: America is at a critical point in history
“There’s a sense of crisis today that we did not have in the 1980’s or 90’s” — economist Tyler Cowen on progress in America.
▸
5 min
—
with
Tyler Cowen
How dirty debaters win against better opponents
How to defeat debaters who deal in distractions, according to a two-time world debate champion.
▸
5 min
—
with
Bo Seo
The mind-blowing stats on male inequality
Male inequality — the enormous cultural shift happening right under our nose.
▸
15 min
—
with
Richard Reeves
The Well
How Earth’s axis and rotation created human ritual
Why do so many cultures celebrate holidays at the same time of year?
▸
4 min
—
with
Sasha Sagan