For six minutes, 150 miles above Kiruna, Sweden, on January 23, 2017, floated the coldest known spot in the universe. As far as we know, the coldest anything in nature can be is absolute zero on the Kelvin scale, which is –459.67°F and –273.15°C. This postage-stamp-sized atom chip packed tight with thousands of rubidium-87 atoms was just a few billionths of a degree warmer than that. The atom chip was up there in low orbit to help a team of scientists study some of the oddest, least-understood stuff there is up close: Bose-Einstein condensate (BEC). The team of German scientists was led by Dennis Becker of QUEST-Leibniz Research School, Leibniz University Hannover, Hanover, Germany.

Bose-Einstein condensate is the fifth-known form of matter, after solids, liquids, gases, and plasma. When atoms in zero gravity reach a temperature close to absolute zero, they cede their individuality and act as one “super-atom.” A that point, they’re tens of thousands of atoms all vibrating in sync, creating something like a blob in which the tiniest of disturbances can be detected. Scientists hope that BEC can one day be harnessed for gravitational wave detection. 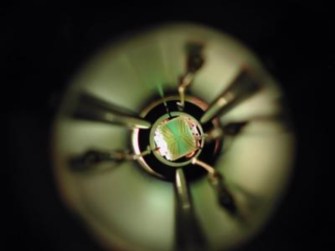 The BEC on Earth

In 2010, scientists at the Max Planck Institute of Quantum Optics packed a cylindrical capsule about the size and width of a door with a few million rubidium atoms trapped on an atom chip, lasers, the required energy supply, solenoids, and a camera. They dropped the capsule 146 meters from the top of a tower. It fell for about four seconds, and during the zero gravity of free-fall, they remotely generated a BEC on the atom chip in less than a second. (In the lab, it takes up to a minute.) Once the BEC formed, they released the trap and the camera allowed them to see its spread as it fell. They were able to observe the BEC for a few seconds before it hit bottom. 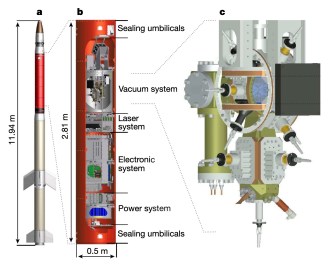 a. MAUIS launch vehicle; b. The launch compartment; c. The vacuum-sealed device holding the atom chip

The January 23rd experiment was the first time anyone’s created the Bose-Einstein condensate in space. The low gravity allowed them to extend the viewing time too the BEC to six minutes, a massive improvement, allowing researcher to race through 110 remote-controlled experiments. The team’s apparatus was launched into space under the auspices of the MAIUS 1, or Matter-Wave Interferometry in Microgravity. 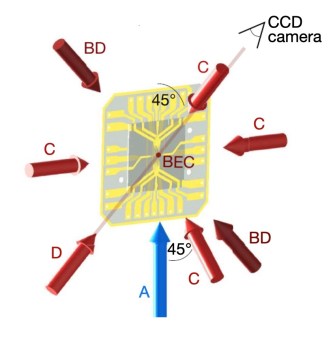 A magneto-optical trap holding the rubidium atoms formed by laser beams (C) is loaded on an atom chip via a cold-atom beam (A). The BEC is created in, transported by, and released from the magnetic trap of the atom chip. Two additional light beams (BD) induce Bragg diffraction scattering the BEC, and a charge-coupled device (CCD) camera records the BEC using laser light (D). 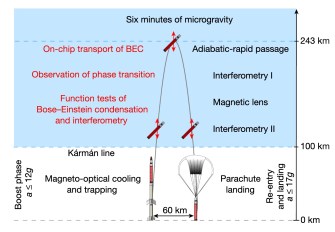 Hurry up and experiment

In one significant experiment, researchers split the BEC with a laser and then were able to watch it rejoin. This could be an important technique because upon parting, the two halves were identical on a quantum level, and any differences observed after rejoicing would indicate some sort of interference, such as a gravitational wave.

NASA has its own Cloud Atom Lab, an ice-chest-sized environment deployed on the ISS for low-gravity BEC research. While Becker’s team made the first space BEC, the NASA team has reportedly been extending the time a BEC can be maintained.

Tags
discoverynanoscalenasaphysicssciencespace
In this article
discoverynanoscalenasaphysicssciencespace
Related
The physics of entropy and the origin of life
How did complex systems emerge from chaos? Physicist Sean Carroll explains.
▸
6 min
—
with
Sean Carroll
The Universe in 90 minutes: The Multiverse, time, free will, God, & more
Everything you ever wanted to know about the Universe, explained by physicist Sean Carroll.
▸
1:33:47 min
—
with
Sean Carroll
Life
“I went to space and discovered an enormous lie”
What astronaut Ron Garan saw in space changed his life forever – here’s what it taught him.
▸
8 min
—
with
Ron Garan
The Well
The 3 “demons” that haunted legendary scientists
Darwin, Descartes, and Maxwell all believed in these science ‘demons.’
▸
7 min
—
with
Jimena Canales
Harvard professor debunks the biggest exercise myths
Exercise culture is crazy. But what you need to do is exceedingly simple.
▸
with
Daniel Lieberman
Up Next
Think Again Podcasts
Ben Marcus’ reality is only slightly askew from our own
Notes from the Fog author Ben Marcus on Elon Musk, the weird existential joys of the reality TV show Castaways, and whether we will eat in the future.