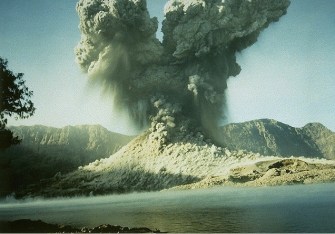 Sometimes it is hard to appreciate how many volcanoes lie within Indonesia. However, within the last few weeks, no less than four Indonesian volcanoes have been put on alert to eruption or shown increased signs of activity – Slamet, Kirinci, Anak Krakatau and now Mt. Rinjani (above).

: The volcano is erupting according to the Jakarta Globe. Seems like the activity so far is confined to small explosions emitting ash and gases. More info as I find it.

Rinjani is a popular tourist destination on the island of Lombok and lies within the Segara Anak caldera (see below). Half the caldera is filled with a lake and on the east side is Mt. Barujari – this is where the current alert is centered. Seismicity has increased and a team of scientists from the Mining and Mineral Resource office will visit the volcano to assess the situation. The volcano is part of the Mount Rinjani National Park and park officials have now closed off the area near Mt. Barujari from tourists.

Barujari last erupted in 2004, producing explosions from the central and flank vents. You can see lava flows from previous eruptions flowing out into the lake on the satellite image of the caldera (below), such as happened in 1966.

The Segara Anak caldera, Indonesia. The dark, conical volcano on the east side of Segara Anak Lake is Mt. Barujari.