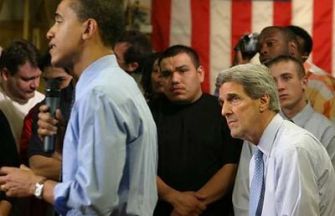 There’s nothing new about politicians using entertainment outlets to promote their presidential aspirations. In 1960, both John F. Kennedy and Richard Nixon appeared on Jack Parr’s Tonight Show. Nixon even played the piano. Yet it was Bill Clinton with his saxophone playing 1992 appearance on the Arsenio Hall Show and his disclosure the same year on MTV that he prefers briefs over boxers, who made entertainment venues the norm for presidential candidates. In 2000, on Oprah, George W. Bush planted a big kiss on the famous host, charming millions of viewers.

Candidates go on these shows to reach audiences who otherwise ignore the campaigns and the news. If as in the case of Bill Clinton or George W. Bush the candidate is also personable and likeable, audiences come way with favorable impressions. In fact, given little or no other competing information about the candidate via news coverage, for these “low information” citizens the personal narratives and likeability quotient displayed on entertainment shows might become the defining criteria in choosing a president.

As Bush’s campaign team figured out in 2004, W. was the type of guy who most people would prefer to have a beer with, while Kerry….well John was very easy to paint as “not one of us.” In fact, Kerry was “too French, and too elitist.” 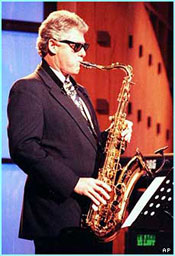 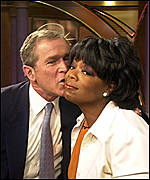 And now Barak Obama is trying to trade on his likeability factor in entertainment appearances. This week he introduced the Chicago v. /St. Louis Monday Night Football game on ESPN, using a clever twist on a faux (for now at least) announcement that he is running for president.

The gimick appears to have paid dividends as a clip of his announcement is one of the top five most viewed videos on YouTube, with the appearance creating buzz across the blogosphere. It’s another sign that an Obama candidacy would be a formidable one. Ask yourself, who would you rather have a beer with… Obama or Hillary?