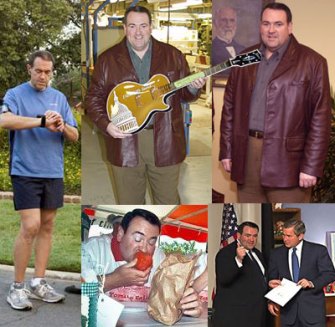 In the 1984 presidential election pitting the charismatic Ronald Reagan against the plodding Walter Mondale, polls showed that a majority of Americans when asked specifically about their policy preferences favored Mondale’s positions over Reagan’s. Yet Reagan ended up winning in a landslide.

The reason was that Reagan’s radical stands on taxes, the economy, and social issues were eclipsed by the penumbra of the former actor’s personality and charisma. Likeability and perceived character became the deciding selection criteria for Americans over the issues.

This tendency by voters to overlook issue positions and go with the candidate they would rather share a beer with is at play in Mike Huckabee’s electoral rise. As Andrew Sullivan quips in a blog header, “It’s the guitar, stupid!”

In other words, although Huckabee holds Stone Age views on reproductive health, Islam, gays, morality, and the origins of the universe, for many voters these beliefs are over-shadowed by his court jester personality and guitar-playing political showmanship. As Le Monde attempts to explain to their French readers:

The guitar is a fundamental element of his strategy. It permits him to reassure those who would never imagine voting for a Baptist from the Bible Belt (southern states where evangelical Protestants are very present).

Related
Health
Could getting rid of old cells turn back the clock on aging?
More work is needed before declaring the technique a fountain of youth.
Thinking
Trimurti: Meet the “Holy Trinity” of Hinduism
Hinduism emphasizes the journey, whichever path that takes. And it holds us responsible for our own self-improvement.
The Past
Riddle solved: Why was Roman concrete so durable?
An unexpected ancient manufacturing strategy may hold the key to designing concrete that lasts for millennia.
13.8
Quantum superposition begs us to ask, “What is real?”
Quantum superposition challenges our notions of what is real.
Measuring Impact
15 research-backed benefits of employee training
The benefits of employee training are felt far and wide, from improvements in workers’ wellbeing to better customer interactions.
Up Next
Guest Thinkers
Mark Penn in Trouble But Who Replaces Clinton’s Guru?
When a candidate falters, the first person blamed is the chief campaign strategist. Six months ago Clinton’s top adviser Mark Penn could do no wrong. He was the guru of […]