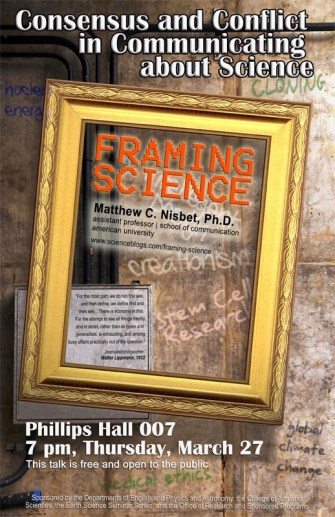 For readers in the Madison-to-Minneapolis region, on Thurs. March 27 I will be giving a talk at the University of Wisconson-Eau Claire. I will be covering much of the same ground that was featured on the two AAAS panels I appeared on earlier this month.

In the talk, not only will I be focusing on the need for new directions in communicating about evolution but also in the area of climate change (see this column for a preview on that latter topic.) In fact, there are many parallels between the two issues in how polarizing communication strategies keep us from making progress.

The talk starts at 7pm and will be in Phillips Hall 007. The event is sponsored by the Departments of English, Physics and Astronomy, the Earth Science Seminar Series, and the Office of Research and Sponsored Programs. A campus map is here.

On March 10 and March 31, I will also be giving talks at UC Berkeley and Princeton University respectively. Details on those events will be forthcoming next week.

Related
Health
Could getting rid of old cells turn back the clock on aging?
More work is needed before declaring the technique a fountain of youth.
Thinking
Trimurti: Meet the “Holy Trinity” of Hinduism
Hinduism emphasizes the journey, whichever path that takes. And it holds us responsible for our own self-improvement.
The Past
Riddle solved: Why was Roman concrete so durable?
An unexpected ancient manufacturing strategy may hold the key to designing concrete that lasts for millennia.
13.8
Quantum superposition begs us to ask, “What is real?”
Quantum superposition challenges our notions of what is real.
Measuring Impact
15 research-backed benefits of employee training
The benefits of employee training are felt far and wide, from improvements in workers’ wellbeing to better customer interactions.
Up Next
Guest Thinkers
Bloggers Who Were at the AAAS Panel Report Back
I hope to have more details on Sunday’s Communicating Science in a Religious America panel later this week and there will also be several media reports forthcoming. The turnout was […]