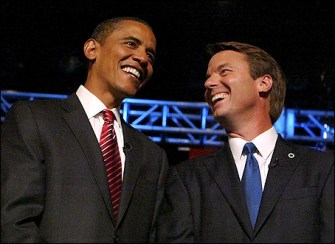 Sigh. Ugh. Damn! That was my reaction when I heard about the brewing allegations that John Edwards had cheated on his sick wife and had fathered a love child. My reaction was not because of disappointment in Edwards. I personally don’t think affairs reveal that much about the qualities that make for a strong president. Nor am I really that surprised when powerful men driven by fame and ambition cheat on their wives. I suspect it’s a temptation that is in most elected officials’ DNA, republican or democrat.

But rather, my reaction was in anticipation of what is a whisp of evidence or video or photo away from being a news tsunami, a media feeding frenzy that threatens to dominate the airwaves during the notoriously slow news month of August. This could be big people and may end up being one of the major political and media distractions in election history.

At the Huffington Post, Lee Stranahan summarizes the variables that are coming together to make this story irresistible to the mainstream press, especially cable news, but even to the investigative units of the NY Times, LA Times, and other major newspapers.

Here are some of what Stranahan reviews as potential news angles ripe for 24 hour coverage:

Despite what some people are going to say, this is news. A former Senator and Vice Presidential candidate who was running for President less than six months ago and is now on the short list for Vice President has an [sic] long affair during the campaign and fathers a child, covers it up, and then is caught at a hotel with the mother of the child. News! Oh — and his wife made regular appearances on the campaign trail and has been diagnosed with cancer….

…This isn’t a Mike Gravel affair. (Sorry to put that image in your head.) John Edwards been the conscience of the Democratic Party this primary season and a compelling presence speaking out on the growing gap between rich and poor. If he wasn’t going to be Vice President, most Democrats wanted him somewhere in an Obama cabinet….

….Will the affair change the way we look back on the primary? Why did Edwards drop out of the race so quickly? Why did Edwards not endorse anyone until his endorsement was a moot point? Endless debates will ensue….

DNA! The press loves any story with DNA. Drama! DNA test refusals. Acceptance. Test goes out. What will happen? It’s like Montel Williams but it takes weeks!

Related
Health
Could getting rid of old cells turn back the clock on aging?
More work is needed before declaring the technique a fountain of youth.
Thinking
Trimurti: Meet the “Holy Trinity” of Hinduism
Hinduism emphasizes the journey, whichever path that takes. And it holds us responsible for our own self-improvement.
The Past
Riddle solved: Why was Roman concrete so durable?
An unexpected ancient manufacturing strategy may hold the key to designing concrete that lasts for millennia.
13.8
Quantum superposition begs us to ask, “What is real?”
Quantum superposition challenges our notions of what is real.
Measuring Impact
15 research-backed benefits of employee training
The benefits of employee training are felt far and wide, from improvements in workers’ wellbeing to better customer interactions.
Up Next
Guest Thinkers
Sizzle? Call for Papers on Documentary Film and Its Impacts
Director Randy Olson’s Sizzle: A Global Warming Comedy has already shaped the agenda and framed the discussion among scientists and the science media, a key impact of a successful documentary […]