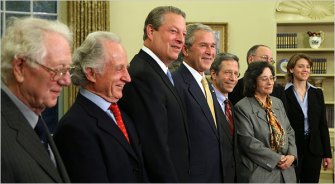 Speculation mounts as to whether Gore will endorse either Obama or Clinton in the Democratic Primary race. My suggestion would be that he stay out of election politics in 2008, except to try to raise the profile of climate change in a non-partisan way.

As I describe in this column and in several public radio interviews, public opinion is little changed today from the time of the release of Inconvenient Truth, despite the massive publicity success of the film and the sharp increase in news coverage of climate change. The reason is that Gore’s success has been a double edged sword. Attention to the film was driven by his partisan celebrity, a great marketing campaign, and his terrific ability to explain the science. But the readily available partisan heuristic of a former Democratic presidential candidate reborn to take up the issue of climate change also ended up being a liability in reaching the roughly half of Americans who do not have a favorable opinion of Gore, including the great majority of Republicans.

As a result, as I describe in the column, over the past three years, across polls, Democrats have grown slightly more accepting of the science, more concerned about the problem, and more willing to make the issue a political priority. Republicans, in contrast, basically remain unchanged, with the great majority rejecting the science, and when asked, rating climate change dead last among 22 issues as a political priority.

So if Gore’s goal is to try to reach the broad American public on climate change, and that includes Republicans, he needs to move into a post-partisan stage of his career. He needs to avoid actions or messages that only serve to remind the public of his once strong Democrat label. So far he has done a great job of staying under the radar with the Democratic nomination process, and in my mind, this is the right course of action.

Gore should wait until the nomination is settled, and then work during the general election in a bi-partisan way to raise the profile of climate change as a campaign issue that all Americans should be equally concerned about.

Related
Health
Could getting rid of old cells turn back the clock on aging?
More work is needed before declaring the technique a fountain of youth.
Thinking
Trimurti: Meet the “Holy Trinity” of Hinduism
Hinduism emphasizes the journey, whichever path that takes. And it holds us responsible for our own self-improvement.
The Past
Riddle solved: Why was Roman concrete so durable?
An unexpected ancient manufacturing strategy may hold the key to designing concrete that lasts for millennia.
13.8
Quantum superposition begs us to ask, “What is real?”
Quantum superposition challenges our notions of what is real.
Measuring Impact
15 research-backed benefits of employee training
The benefits of employee training are felt far and wide, from improvements in workers’ wellbeing to better customer interactions.
Up Next
Guest Thinkers
Why the PZ Myers Affair is Really, Really Bad for Science
If you haven’t seen this clip yet, above is a preview of the central message on how “Big Science” views religion in the documentary Expelled. There’s little work needed on […]