The clock is ticking for the new dome growing at Redoubt to collapse. What will happen if/when it does collapse? Good question! 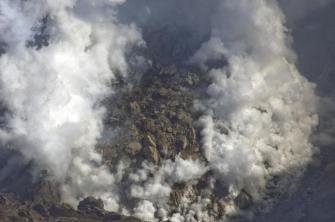 Most likely, the following will occur:

Generation of pyroclastic flows from dome collapse. Figure courtesy of the USGS.

Impressive, eh? Of course, it might not happen exactly like this. There are many variable (extent of collapse, pressure from underlying magma, magnitude of pyroclastic flows generated and many others), but more than likely, block & ash flows and lahars will be generated when the dome does collapse.

The latest from AVO suggests they think it will happen soon and without much warning, so keep an eye on the webcams (DFR and Hut).