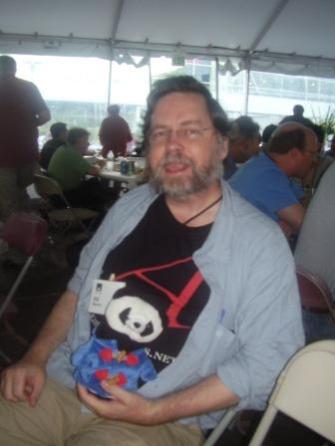 The dominant image of atheism: Blogger PZ Myers wearing a scarlet letter “A” for atheism T-shirt.

Atheists have a major image problem. There’s a reason that when people ask me what I believe I have to say with a smile: “I’m an atheist…but a friendly atheist.” For sure, atheists for a long time have been unfairly stereotyped in the mainstream media and in popular culture. But we also have a lot of lousy self-proclaimed spokespeople who do damage to our public image. They’re usually angry, grumpy, uncharismatic male loners with a passion for attacking and ridiculing religious believers. Any fellow atheist who disagrees with their Don Imus rhetoric, they label as appeasers.

Yet all of this does far more harm than good. The addictive nature of their rhetoric radicalizes us and leads us to an ever more closed off conversation about how we are superior and everyone else is delusional.

In the process, we miss out on working together with religious communities around shared common values and problems. And when their self-promoting atheist punditry is picked up by either the mainstream press or the religious media, we as a community of atheists incur deep self-inflicted wounds, with news coverage feeding the stereotype that we are a bunch of intolerant and arrogant eccentrics.

Consider this recent article at the National Catholic Register. Titled “The Face of the New Atheism,” it profiles PZ Myers and his rants against the Eucharist and the Catholic community. Notice the key words emphasized. The dominant image of atheism portrayed in the article is one of “hate,” “contempt,” “dogmatism,” “a junior high level understanding of religion,” “irate,” “incredulous,” “bigoted”…the list goes on.

Is this how we really want Catholics to view us? Do we really want a group of moderately religious Americans–who polls show otherwise prize science and reason, and who stand for many of the same values that we hold dear–to think of us through the prism of PZ Myers?

The image of atheism doesn’t have to be this way. As I have argued before, if you want to improve the image of atheists you have to step away from being just another shrill voice in the argument culture and focus on building a diverse, inter-connected community, of standing for something, rather than just against something!

The points of emphasis for the rest of the public should be on “strong community member and leaders,” “teachers,” “listeners,” “working with others on common problems,” “tolerant,” “engaged,” “open-minded,” “pragmatic,” “improving society,” “cares about people and social issues…”

Consider the example of this National Public Radio story that ran yesterday. It profiles CFI’s Camp Inquiry, a “brain spa” as one camp counselor puts it. The story focuses on a community of open-minded, tolerant teenagers coming together to do all the normal things kids do at camp, but also to discuss philosophy, science, and religion. Rather than attacks and ridicule, the camp kids are focused on learning, reflection, and dialogue. Atheists are not “the other” in the form of an eccentric, angry old man, but rather community members like any other American.

This is the “new atheism” that we should promote, not an image of attacks and intolerance.

The other image of atheism: From the NPR segment, DJ Grothe leads a discussion with kids attending Camp Inquiry.

Related
Health
Could getting rid of old cells turn back the clock on aging?
More work is needed before declaring the technique a fountain of youth.
Thinking
Trimurti: Meet the “Holy Trinity” of Hinduism
Hinduism emphasizes the journey, whichever path that takes. And it holds us responsible for our own self-improvement.
The Past
Riddle solved: Why was Roman concrete so durable?
An unexpected ancient manufacturing strategy may hold the key to designing concrete that lasts for millennia.
13.8
Quantum superposition begs us to ask, “What is real?”
Quantum superposition challenges our notions of what is real.
Measuring Impact
15 research-backed benefits of employee training
The benefits of employee training are felt far and wide, from improvements in workers’ wellbeing to better customer interactions.
Up Next
Guest Thinkers
For UW-Madison Readers: Talk on Framing and the Marketing Problem in Science
This blog has a ton of readers from the Madison, Wisconsin area. It’s not surprising given that the university town is a major international hub for interest in science communication […]