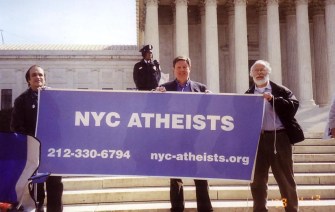 Survey trends show that atheists are America’s least trusted minority, ranking below Muslims, recent immigrants, homosexuals and other groups. Moreover, Pew studies indicate that Americans are very comfortable with religion interceding in public life, and with the expression of religious faith on the part of candidates. The same Pew studies show Dems continue to have a “God problem.” Even among so-called centrist members of the public, the party is perceived as hostile to religion, and this perception is a stronger predictor of presidential vote choice than either gender or church attendance.

So it’s not surprising that when The Americans For Religious Liberty released their religious affiliation study of Congress, only six members list themselves as unaffiliated.