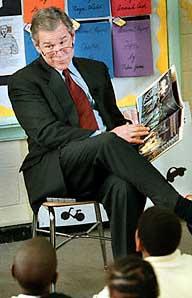 A battle appears to be brewing in Texas over the proposed Presidential library at SMU:

DALLAS – Negotiations to build George W. Bush’s presidential library at Southern Methodist University have divided the campus, pitting the administration and some alumni against liberal-leaning faculty members who say the project would be an embarrassment to the school. Some professors have complained that the combined library, museum and think tank would celebrate a presidency that unnecessarily took the country into a war.