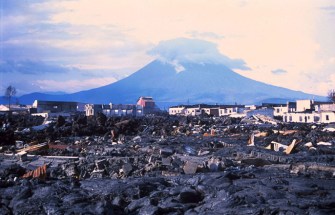 Goma after the 2002 Eruption of Nyiragongo

The activity at Redoubt has captivated a lot of us, but in the grand scheme of things, its eruption are more likely to caused inconvenience and property damage rather than dramatically loss of life (unless something huge and unexpected occurs). However, the same cannot be said if Nyiragongo and/or Nyamuragira (a.k.a. Nyamulagira) in the Congo were to erupt. These volcanoes are close to the city of Goma, a city of nearly 600,000, not including refugees from the fighting in the region. Eruptions of Nyiragongo in 2002 prompted the displacement of 400,000 people as lava flows invaded the city.

Currently, Dieudonne Wafula, lead scientist at the Volcanological Observatory of Goma is reporting that there is increased seismic unrest underneath the volcanoes – mostly centered under Nyamuragira, however activity is seen at both volcanoes. Luckily, right now at least, the lava lake at Nyiragongo is low, which might reduce the damage if an eruption were to take place. The Red Cross is standing-by in case an eruption occurs or evacuations are needed.

Both volcanoes have lava lakes at the summit, and these lava lakes have the potential to drain rapidly, sending fast-moving lava flows into populated area. It is, in fact, one of the few places were lava flows present such a large volcano hazard for people (lava flows are a large problem for property many places as it can’t get out of the way). In 1977, the lava lake at Nyiragongo drained catastrophically, sending the basaltic lava down the side of the volcano at nearly 100 km/hr (60 mph), killing 70 people.

Nyiragongo is somewhat unique in the sense that the lava erupted from the volcano is very low in silica, thus very fluid, so when the lava lake breached, this very fluid lava rushed down the volcano at speeds much faster than most lava flows (which you could out-walk). This fluidity was probably amplified by the fact that the lava was all stored in a lava lake, keeping a large volume hot and ready to move. Something like this is not likely to happen at other basaltic volcanoes such as those in Hawai’i. In recent volcano research news, Dr. Asish Basu at Rochester University thinks that this unique nature of the Nyiragongo lavas – their isotopic composition especially – is due to the fact that a new “plume” is reaching the Earth’s surface in this part of Africa. It is an interesting theory, but not one that has been robustly analyzed yet. In any case, the activity at Nyiragongo and Nyamuragira are well worth our attention as any major eruption could have dire consequences for the people living in Goma and the eastern parts of the Congo.

Related
Health
Could getting rid of old cells turn back the clock on aging?
More work is needed before declaring the technique a fountain of youth.
Thinking
Trimurti: Meet the “Holy Trinity” of Hinduism
Hinduism emphasizes the journey, whichever path that takes. And it holds us responsible for our own self-improvement.
The Past
Riddle solved: Why was Roman concrete so durable?
An unexpected ancient manufacturing strategy may hold the key to designing concrete that lasts for millennia.
13.8
Quantum superposition begs us to ask, “What is real?”
Quantum superposition challenges our notions of what is real.
Measuring Impact
15 research-backed benefits of employee training
The benefits of employee training are felt far and wide, from improvements in workers’ wellbeing to better customer interactions.
Up Next
Guest Thinkers
Discovery’s Top 10 volcanoes and MSNBC’s “volcanoes by dummies”
Like any “top 10” list, Discovery Channel’s “Top 10 Volcanoes in Geologic History” doesn’t get the whole picture. Meanwhile, MSNBC continues the fine tradition of terrible science journalism.