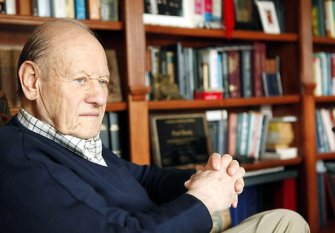 In 2007, I called attention to a Point of Inquiry interview with philosopher Paul Kurtz in which he expressed concern over the direction of the New Atheist movement while asserting the commonly shared values between secular humanists and many world religions. Kurtz at the time was not the only prominent humanist to voice such concern, as Philip Kitcher in a POI interview expressed dismay over the “unremittingly negative” rhetoric of New Atheist authors.The interview was one of the first volleys in an ever louder critique by Kurtz of the New Atheist movement, affirmed earlier this month in his release of a new statement on secular humanist principles and values. Yesterday, the Buffalo News ran a feature offering more insight on Kurtz’s criticism of the New Atheist movement. The full article should be read, but below I have pasted a few key excerpts. This summer, I am hoping to return to this subject, elaborating on a blueprint for how secular humanists and the non-religious can engage with their local communities on commonly shared values and goals, promoting mutual learning and dialogue while improving the image of non-believers. From the Buffalo News:

Kurtz worries that, even worse, the momentum he helped build toward a less faith-bound world is now overly focused on attacking religion, at the expense of other goals.”It’s become fixated in recent years on atheism, the criticism of religion,” he said. “And I think that’s a strategic blunder. Not just a strategic blunder, but a philosophical and ethical one, as well.”Don’t misunderstand Kurtz, who hasn’t had a change of heart in his advanced years. He has always viewed religions skeptically. “They were spawned during an agricultural, rural time,” he said. “They don’t apply to the modern world.”He still doesn’t believe in a god or an afterlife, because “there’s no evidence for that.”At the same time, he sees a place for believers in the broad spectrum of secular humanism — in large part because, without them, any movement toward societies based on principles of humanism, rather than faith, will go nowhere.”Let’s say the atheists are successful, and religion continues to decline, so what do you have, a vacuum?” he said. “That’s really the burning issue in America today: How shall I live? What should I strive for?”

[Note: A native of Buffalo, I worked at the Center for Inquiry between 1997-1999 before heading to graduate school. Lee Nisbet, quoted in the Buffalo News article, is my uncle.]