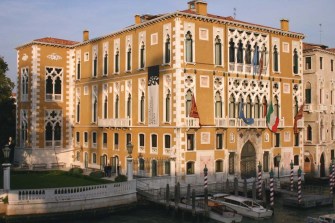 I am in Venice, Italy this week to participate in an expert workshop on research in science communication held at the historic Venice Institute of Science & the Arts (above). Already there have been some terrific presentations and I will have more to report later. But for now, in advance of my visit, I was invited to contribute an op-ed to the Science section of La Stampa, one of Italy’s national newspapers. Go here to read a PDF of the op-ed in Italian. The draft English version that was then translated is below.

Science Communication: From Transmission to Conversation

Over the past few years, there have been notable signs in Europe and the United States of a major shift in how the scientific community views public communication. Left behind is the assumption that simply informing an audience of the facts of science will meaningfully alter perceptions or decisions. Instead, on issues ranging from global warming to biomedical research, one can detect a growing recognition that effective communication involves directly addressing an intended audience’s values, interests, and worldviews.

These new directions are a welcome change from decades-old approaches that focus narrowly on educating the public through popular science depictions at newspapers, magazines, television, and specialized Web sites. In these efforts, it is assumed, that once the media brought citizens up to speed on the science in dispute, then the public would be more likely to judge scientific issues as scientists do and controversy would go away. Communication is erroneously defined as a process of transmission. The facts are assumed to speak for themselves and to be interpreted by all citizens in similar ways. If the public does not accept or recognize these facts, then the failure in transmission is blamed on science journalists, “irrational” public beliefs, or both.

Unfortunately, condescending claims of “public ignorance” too often serve to further alienate key audiences, especially in cases such as evolutionary science or biomedical research, when these charges are frequently mixed with atheist critiques of religion. Moreover, by emphasizing what is wrong with the public and with journalists’ coverage of issues such as global warming, many scientists ignore the possibility that their communication efforts might sometimes be part of the problem.

Yet the greatest weakness in these popular science approaches is that they tend to only reach a small audience of already informed science enthusiasts. Research shows that most individuals typically lack the time, motivation and the ability to pay close attention to quality science coverage and to carefully assess scientific issues or policy debates. Instead, just as they do in purchasing consumer goods or voting in elections, individuals rely on a variety of mental shortcuts to reach judgments. The nature of the media system exacerbates this human tendency. With increased media choices, it is very easy for audiences who lack a preference for science news to avoid such information all together, instead paying only close attention to entertainment media or just a few public affairs topics.

So what is an alternative model for science communication to follow? To start, recent initiatives are shifting in their strategy from transmission to conversation. In reaching out to activist groups and concerned citizens, science organizations and government agencies are sponsoring deliberative forums, open meetings, and consensus conferences. In these initiatives, participants hear from experts and stakeholders and then provide their own input on what should be done in terms of policy. Studies find that lay participants at these meetings not only learn about the science and politics involved, but they also end up perceiving relevant institutions as more responsive to their concerns, and leave the forum with enhanced feelings of trust.

In combination with these public dialogue efforts, scientists and their organizations are also starting to focus on “framing” their media messages in ways that connect a scientific topic to something the intended audience already values or understands, while discovering new communication platforms for reaching audiences.

For example, in the United States, the National Academies has used audience research to inform their communication efforts on evolutionary science. Their research suggested that by framing evolutionary science as a building block for modern medical advances, they can begin to unlock appreciation among audiences who might otherwise be skeptical based on religious beliefs or ideology.

On global warming, Al Gore’s We campaign is reframing policy action in terms of a moral and religious duty to “repower America” through new energy technology and increased energy efficiency. Campaign advertisements compare action on global warming to the Civil Rights movement and the Space Race. Importantly, these ads are placed during day time talk shows, entertainment programming, and in leisure magazines, all of which reach non-news audiences who might not otherwise be paying attention to news coverage of the issue.

These new strategies are by no means a magical key to unlocking greater public engagement with science and its implications for society, but they are important first steps. To continue to believe that effective public communication involves the transmission of popularized knowledge is simply…unscientific.

Related
Health
Could getting rid of old cells turn back the clock on aging?
More work is needed before declaring the technique a fountain of youth.
Thinking
Trimurti: Meet the “Holy Trinity” of Hinduism
Hinduism emphasizes the journey, whichever path that takes. And it holds us responsible for our own self-improvement.
The Past
Riddle solved: Why was Roman concrete so durable?
An unexpected ancient manufacturing strategy may hold the key to designing concrete that lasts for millennia.
13.8
Quantum superposition begs us to ask, “What is real?”
Quantum superposition challenges our notions of what is real.
Measuring Impact
15 research-backed benefits of employee training
The benefits of employee training are felt far and wide, from improvements in workers’ wellbeing to better customer interactions.
Up Next
Guest Thinkers
More Details on NSF “Reporting Climate Change” Panel
From an email sent out this morning by NSF. If readers can make it, this panel is definitely worth attending.NSF to Host Panel Discussion on Communicating Climate ChangeJournalists Andy Revkin […]