Chaiten erupting in May 2008. Image courtesy of ONEMI.

Speaking of anniversaries, this weekend is the one-year mark for the Chaiten eruption (in spanish) in Chile, the first eruption at the volcano in ~9,000 years. Yes, indeed, the rhyolite eruption that caught most everyone by surprise is still going strong one year later, with two domes growing within the caldera (in spanish). The eruption produced some of the most impressive and sustained ash columns in years (see below) – climbing to 16 km/9 mi, abundant lahars and pyroclastic flows from the emergence and growth/collapse of the domes and almost constant seismicity under the volcano. Estimates of the volume erupted from Chaiten are at least 4 km3 of volcanic material. For the size of the eruption, we are all very lucky considering the lack of fatalities and damage – except, of course, to the town of Chaiten (below) that needed to be abandoned and the problems the eruption caused to air travel in South America. The new site of Chaiten has been chosen – not without controversy – but the town has yet to be rebuilt. 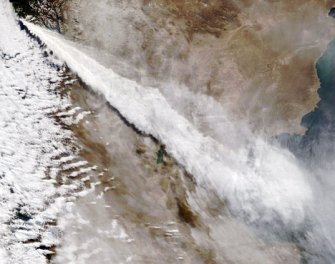 The ash column from Chaiten during May 2008.

I’ve tried to keep up with the comings-and-goings with all the activity at Chaiten for the last year, but with all the information, it can be very difficult. The Volcanism Blog has an excellent summary of a year at Chaiten, especially the reports in the Chilean press and its effect on Chilean politics. There are major unanswered questions – both geological and social – that need to be tackled concerning Chaiten. There is not much known about the nature of magma generation at Chaiten, but many of us are hard at work tackling the issues. Remember, the eruption of Chaiten is very likely a once-in-a-lifetime event, so enjoy it! Who knows how long this dome growth might persist or what direction the eruption might take, but we can be sure that we will be learning from this eruptions of years to come.

Lahar damage to the town of Chaiten, Chile.