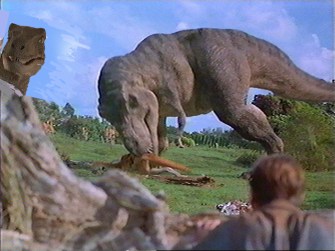 Film education? Consulting scientists on Jurassic Park helped morph the image of dinosaurs in the public’s mind from reptilian to avian, popularized the idea of “Chaos Theory,” and made plausible the notion of animal cloning, preparing the public for later real world announcements such as Dolly the cloned sheep.

The National Academies has launched a bold new initiative to pair scientists with Hollywood film and television producers, with the goal of shaping the portrayal of science and scientists in the entertainment media. Dubbed the “Science & Entertainment Exchange,” the project is designed to provide “entertainment industry professionals with access to top scientists and engineers to help bring the reality of cutting-edge science to creative and engaging storylines.”

As University of Manchester scholar David Kirby has chronicled, there is a long history of scientists working with filmmakers to promote realism and scientific perspectives in movies such as Jurassic Park. Moreover, public health experts have worked with Hollywood in “entertainment education” initiatives designed to promote personal behavior change or public awareness of health risks.

Now with the leadership and resources of the National Academies, lessons from these past efforts can be brought to bear in new collaborations between science and Hollywood. This new public engagement initiative will be one to watch. Expect updates and analysis at this blog in coming months.

Related
Health
Could getting rid of old cells turn back the clock on aging?
More work is needed before declaring the technique a fountain of youth.
Thinking
Trimurti: Meet the “Holy Trinity” of Hinduism
Hinduism emphasizes the journey, whichever path that takes. And it holds us responsible for our own self-improvement.
The Past
Riddle solved: Why was Roman concrete so durable?
An unexpected ancient manufacturing strategy may hold the key to designing concrete that lasts for millennia.
13.8
Quantum superposition begs us to ask, “What is real?”
Quantum superposition challenges our notions of what is real.
Measuring Impact
15 research-backed benefits of employee training
The benefits of employee training are felt far and wide, from improvements in workers’ wellbeing to better customer interactions.
Up Next
Guest Thinkers
Framing the Economic Crisis: Bailout or Rescue Plan?
How critical is framing to effectively communicating about complex policy problems, especially under conditions of uncertainty? Just take a look at the debate over the economic crisis.As I noted last […]