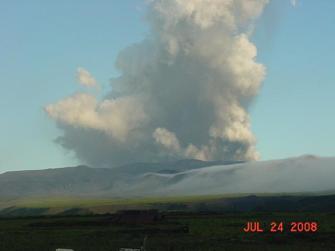 Count this as your mini-update for Redoubt, with the news being no news. Even AVO seems a little bored with Redoubt lately (not to say they aren’t watching it as vigilantly as ever) as their last three updates have been exactly the same:

Redoubt volcano has not erupted. Seismicity is low, but above background levels and consists mainly of small discrete earthquakes. Night has fallen and no image is visible in the webcam.

However, down the road (arc-wise) in the Aleutians, AVO has raised the alert level at Okmok Caldera. New volcanic tremors were felt yesterday at Okmok, averaging about one event per hours, which is above the normal background seismicity for Okmok. It also marks the first volcanic tremors since the volcano erupted this past July and August (see above from AVO). However, they don’t go as far as to say that an eruption at Okmok is likely, but to be on the safe side, they have raised the Aviation Color Code alert to Yellow.

{Hat tip to the Volcanism Blog for bringing the Okmok activity to my attention.}