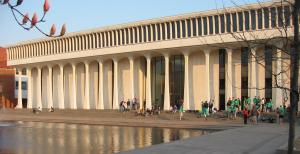 For readers on campus or in the area, on Monday I will be giving a lecture hosted by the Program in Science, Technology, & Environmental Policy (STEP) at Princeton University’s Woodrow Wilson School of Public and International Affairs. The talk is scheduled for 1145am to 1pm and will be in 300 Wallace Hall. Below is a description:

Over the past several years, controversies over evolution, embryonic stem cell research, global climate change, and many other topics have led to a troubling revelation. Scientific knowledge, alone, does not always suffice when it comes to winning political arguments, changing government policies, or influencing public opinion. Put simply, many journalists, policymakers, and citizens consume and act on scientific information in a vastly different way than do the scientists who generate it. As a result, scientists and their organizations repeatedly face difficult challenges in explaining their knowledge to diverse groups of citizens.

As one possible antidote to repeated communication failures, many scholars have advocated large-scale investments in “public dialogue” initiatives such as town meetings, deliberative forums, and science cafes. But like any other tool, such deliberative meetings have obvious limitations. Most importantly, very few people actually participate. Indeed, research shows that at these forums, the citizens who are most likely to attend and speak up are those who are already informed, opinion-intense, and active on an issue.

As issues at the intersection of science, society, and policy gain more and more attention, something beyond just traditional science communication efforts and small scale deliberative meetings will be necessary to effectively engage the diverse American public. Recognizing this pressing need, this year, in articles appearing at the journal Science (& reply to letters), the Sunday Outlook section of the Washington Post, and The Scientist magazine, Nisbet challenged prevailing assumptions and proposed several innovative–if not controversial–methods.

With his respective co-authors Chris Mooney and Dietram Scheufele, Nisbet argued that scientists must draw on research from political communication in order to systematically “frame” their messages across media outlets in ways that connect with diverse audiences. This means remaining true to the underlying science, but drawing on polling and focus group research to tailor messages in ways that make them personally relevant and meaningful to different publics.

His ideas triggered an international blog debate, generated considerable media attention, and launched a national speaking tour that has taken Nisbet to more than two dozen universities, cities, and venues over the past six months. In this presentation, he details his “controversial” suggestions that scientists adopt a scientific approach to communicating with the public and the media. He also discusses the political and social nature of the reaction to his arguments.

Related
Health
Could getting rid of old cells turn back the clock on aging?
More work is needed before declaring the technique a fountain of youth.
Thinking
Trimurti: Meet the “Holy Trinity” of Hinduism
Hinduism emphasizes the journey, whichever path that takes. And it holds us responsible for our own self-improvement.
The Past
Riddle solved: Why was Roman concrete so durable?
An unexpected ancient manufacturing strategy may hold the key to designing concrete that lasts for millennia.
13.8
Quantum superposition begs us to ask, “What is real?”
Quantum superposition challenges our notions of what is real.
Measuring Impact
15 research-backed benefits of employee training
The benefits of employee training are felt far and wide, from improvements in workers’ wellbeing to better customer interactions.
Up Next
Guest Thinkers
AU Students Debate the Internet’s Impact on Society, Part B
This fall in the sophomore-level course I teach on “Communication and Society,” we spent several weeks examining the many ways that individuals and groups are using the internet to alter […]