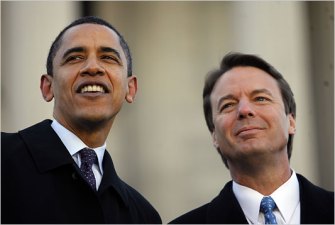 Edwards’ follies are likely to hurt Democratic chances in November and further derail media attention from issues that really matter.

Tonight on ABC Nightline, John Edwards will admit his affair but will deny the alleged love child, putting even more of a twist on the brewing media tsunami. As I predicted last week, this story promises to dominate the news agenda for August, leading up to and through the Democratic convention. Unfortunately, denying the link to the child will only drive the story and make it bigger.

If there is any silver lining, it’s that Edwards chose a Friday to make the announcement–as well as the opening day of the Olympics–a calculated gamble to try to bury it on the media agenda. As an ABC source tells the Wpost: “Edwards is smart. He’s doing this on another network when everyone’s going to be watching the Opening Ceremonies” on NBC.