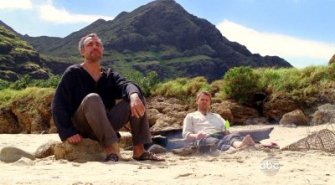 Jacob with his black-clad counterpart.

Much was revealed in last night’s fifth season finale for Lost, the penultimate for the series. Here’s my take:

Apparently Jacob is a Judeo-Christian God-like figure, the “others” and Richard are his angels, and the survivors of Oceanic Flight 815, like many a vessel previously crashed at the island by Jacob, are his human flock. Jacob, or God, appears benevolently in the survivors’ off-Island lives, sometimes intervening to save their lives while at other times offering encouragement or reassurance. Yet as Jacob mentions in the season finale, each human has “free will,” something that plays out as a new band of cast away survivors arrive at the Island over the years, with some survivors choosing greater and lesser forms of conflict, violence, or peaceful co-habitation.

Of course, there is an alternative to Jacob, a Satan-like figure committed to killing him, and in search of a “loop” to do so. This Satan counterpart–(perhaps also the corporeal black cloud beast)–can inhabit the form of individuals who arrive dead at the island, like this season’s Locke and importantly Jack’s father.

In this human form, whether Locke in the season finale or Jack’s father in previous episodes, Satan intervenes in the lives of the characters to lead them on a trajectory that enables him to ultimately kill Jacob at the end of the season finale.

In this view, the Island is a metaphor for a Judeo-Christian version of human history and civilization. Humans choose acts of good and evil with the free will to do so, as God and Satan watch and sometime intervene.

There’s just one catch to Satan’s success at the end of the finale: When the 1970s stranded survivors exploded the hydrogen bomb, the intervention likely altered the present time line enabling Jacob to escape the death that his evil Island counterpart had successfully put into action.

One last side note: If the Island is metaphorically a Judeo-Christian universe, then the Dharma Initiative represents the Enlightenment intervention of science and reason into the medieval equilibrium between God and Satan. The “Others” are traditional followers of Jacob, living like Adam and Eve in the Garden of Eden. The Dharma Initiative are a combination of scientists, engineers, and New Age hippies ignorant of Jacob’s existence but no less influenced by him.

That’s my quick take, but I will likely prove to be wrong. 😉 For more, check out the professional Lost theorists.

Related
Health
Could getting rid of old cells turn back the clock on aging?
More work is needed before declaring the technique a fountain of youth.
Thinking
Trimurti: Meet the “Holy Trinity” of Hinduism
Hinduism emphasizes the journey, whichever path that takes. And it holds us responsible for our own self-improvement.
The Past
Riddle solved: Why was Roman concrete so durable?
An unexpected ancient manufacturing strategy may hold the key to designing concrete that lasts for millennia.
13.8
Quantum superposition begs us to ask, “What is real?”
Quantum superposition challenges our notions of what is real.
Measuring Impact
15 research-backed benefits of employee training
The benefits of employee training are felt far and wide, from improvements in workers’ wellbeing to better customer interactions.
Up Next
Guest Thinkers
Like-Minded Discussion and Attitude Extremity about Science
Several colleagues at the University of Wisconsin-Madison have a new study out that shows not surprisingly that like-minded conversations drive attitude extremity relative to science policy. Analyzing data from a […]