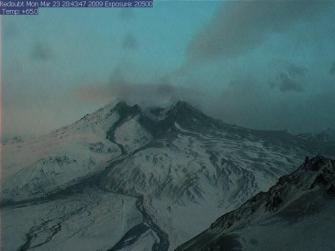 I don’t have many details, but the largest eruption so far in this eruptive stage at Redoubt occurred at 9:24 AM (Alaska Time), producing a 65,000 foot / 20,000 meter ash column! Yes, you read that right, a 20-km ash column! This is by far the largest ash column so far and AVO has returned Redoubt to Red/Warning status after this and a small explosion that occurred 30 minutes before the big one. Depending on the winds at various elevations, this sort of large ash column could threaten to coat Anchorage with ash – check the latest NOAA warnings here but currently there is an ashfall advisory for all the western Kenai Peninsula. This will likely also disrupt air traffic over southern Alaska.

I’ll fill in more details here as they come in so check back for updates.

In the meantime, you can check the AVO Redoubt page or the webcams – Hut or Cook Inlet.