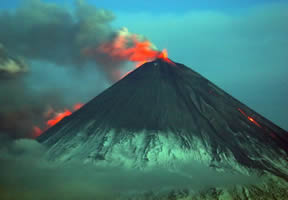 Reports from Russia indicate that Klyuchevskoy, Russia’s largest volcano, is erupting. It sounds like it might not be just a murmur as Alexei Ozerov from the Institute of Volcanology and Seismology of the Far Eastern branch of the Russian Academy of Sciences says the volcano is spewing ash, rock and gases. No real details on how tall the eruption column is, but the report mentions a hazard to aircraft in the area, which would suggest that the column is at least in the 3,000-5,000 meter range. Klyuchevkoy is part of the Kamchatka volcanoes in far east Russia and last saw a major eruption in 2007 (see picture above). Last month there were brief mentions of increased signs of activity at the volcano, and this sounds like they were, indeed, leading to an eruption.

Related
Health
Could getting rid of old cells turn back the clock on aging?
More work is needed before declaring the technique a fountain of youth.
Thinking
Trimurti: Meet the “Holy Trinity” of Hinduism
Hinduism emphasizes the journey, whichever path that takes. And it holds us responsible for our own self-improvement.
The Past
Riddle solved: Why was Roman concrete so durable?
An unexpected ancient manufacturing strategy may hold the key to designing concrete that lasts for millennia.
13.8
Quantum superposition begs us to ask, “What is real?”
Quantum superposition challenges our notions of what is real.
Measuring Impact
15 research-backed benefits of employee training
The benefits of employee training are felt far and wide, from improvements in workers’ wellbeing to better customer interactions.
Up Next
Guest Thinkers
A magma chamber’s ebb and flow
nnIf you ever want your research to be picked up by the popular press, you pretty much need to publish in the journal Science. It (along with Nature) are seen […]