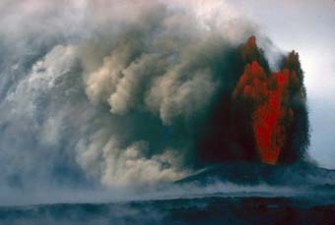 Kilauea is busy keeping geologists and tourists alike wondering what the volcano will be doing next. The current report on the volcano tells of a new fire fountain at the Thanksgiving Eve Break-out “rootless cone”, about 6 miles from the ocean. The fire fountain started on Sunday night, issuing lava up to 40 feet in the air and the USGS has posted an amazing video of the fountaining on the HVO website. However, unlike the predicted behavior where magma at Kilauea starts near the summit and moves into the rifts, these lavas appear to be unrelated to the activity going on at the summit of Kilauea. This could mean that we have less of a grasp on the internal plumbing of this giants shield volcano than we previously thought … and it is always exciting when nature decides to prove us wrong!

This heightened state of eruption at Kilauea during the past week has also doubled the levels of sulfur dioxide being emitted from the volcano, which, of course, leads to more of the dreaded vog. Most of it has blown out to sea, but as winds change, so might that.

Edited 7/8/08 to fix location of the eruption (thanks to Mariek Schmidt for the clarification).