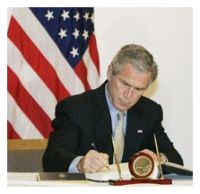 As Sciencereports, the big news this week is that Congress passed a bill that adopts almost all of the recommendations of the 2005 National Academies report Rising Above the Gathering Storm: Energizing and Employing America. The bill was signed this morning by President Bush.

The unprecedented success at translating expert recommendations into a policy victory is in no small part due to the strategic framing of the initiative. The complexities of this bill were put in terms that policymakers and the public could understand, value, and support. As one backer described: “We quit talking about the virtues of science in the abstract and started talking about its impact on jobs. Everybody understands jobs.”

As Science details, the 2005 NAS report named 20 priorities, including better science and math teachers, a sustained boost in federal spending on research, especially for the physical sciences and engineering, and increased support for those planning to become scientists. The recommendations were incorporated into the America COMPETES (Creating Opportunities to Meaningfully Promote Excellence in Technology, Education, and Science) Act, a 407-page bill that authorizes $43 billion over 3 years for research and training programs. It passed the House by a vote of 367-57 and the Senate by unanimous consent.

[At the Dept. of Energy, the bill also created the Advanced Research Projects Administration for Energy (ARPA-E) with three principal goals: reduce foreign energy imports, reduce greenhouse gas and other emissions, and improve energy efficiency. No bill is perfect. Joe Romm, a former asst. Energy secretary, is one expert who finds fault with this proposal.]

As Science describes, the reason this bill was so successful whereas past science initiatives failed, was because of its packaging and its framing. According to the magazine:

Part of the reason for the overwhelming support was that America COMPETES is not a spending bill that appropriates money for the next, or any, fiscal year. Instead, it’s an authorization bill that describes broad policies an agency should follow, specifies programs to achieve those goals, and endorses a desired spending level. It is the job of the appropriations committees to decide how much money will be spent in any particular year. Appropriators are still working on the 12 spending bills for the 2008 fiscal year that begins 1 October. The preliminary signs are good for the three agencies–the National Science Foundation (NSF), the Department of Energy’s Office of Science, and the National Institute of Standards and Technology (NIST)–that are included in the president’s American Competitiveness Initiative (ACI), itself a response to the academies’ report. Still, the new legislation gives appropriators lots of suggestions.

Besides shifting the focus from spending to authorization, the framing of the bill–starting with the initial National Academies report The Gathering Storm and ending with the actual title of the bill COMPETES–was also decisive.

As I’ve noted here many times, major funding initiatives for science are mostly likely to be successful in winning support from policymakers under conditions where the initiative can be exclusively defined in terms of economic competitiveness and growth.

And that’s exactly what happened with this legislation, as Science notes:

Why was the academies’ report so influential when similar proposals to bolster science have fallen short in the past? The trick this time around, says Norman Augustine, former CEO of Lockheed-Martin and chair of the panel that produced the report, was to argue in terms that the public would understand. “We quit talking about the virtues of science in the abstract and started talking about its impact on jobs,” he explained about the 2-year lobbying effort by university and industry leaders. “Everybody understands jobs.”