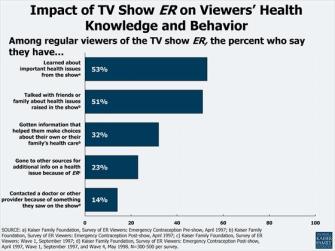 As we discuss in a current working paper, the “going broad” strategy of using entertainment media to reach wider audiences was first pioneered in the area of health.

For example, working in collaboration with experts, screenwriters for the series ER purposely inserted plot scenarios intended to raise attention to beneficial health behaviors. Evaluation of the efforts found important impacts in raising awareness, discussion, and interest in the featured health topic among viewers. More recently, a special issue of the American Journal of Bioethics evaluated the use of programs such as House to teach viewers–even medical students–about ethics.

Not every TV series, of course, reflects closely expert views or opinion. Last week, I found myself thinking this as I sat in the living room working from my laptop as my girlfriend watched the season finale of Gray’s Anatomy. The plot line involving a major character’s life and death choices on how to treat her skin cancer which had spread to her brain seemed a bit far fetched, if not misleading for viewers.

Turns out my suspicions were correct. Here’s how USA Today presented the problem last week:

The two-hour broadcast depicted Izzie and her fellow doctors agonizing over how to treat her melanoma — a deadly form of skin cancer — that had spread to her liver, bowel and brain. Because of the location of her brain tumor, doctors presented her with two unattractive options: surgery that could leave her with severe memory problems or a highly toxic drug called interleukin-2, or IL-2.

In fact, doctors never recommend IL-2 for melanoma that has spread to the brain because it can cause bleeding and strokes, says Otis Brawley, chief medical officer at the American Cancer Society. If doctors are concerned about the risks of surgery, they recommend radiosurgery, in which doctors focus intensive radiation on the tumor, he says….

…Though TV hospital shows are great drama, they often stretch the truth, says Brawley, who concedes he went into medicine partly because he was inspired by shows such as Medical Center, the CBS drama that aired from 1969 to 1976. “Many people view the cancer problem as much simpler than it actually is,” Brawley says. “That’s because they get their medical information from television shows. But television shows are by and large fictional, and much of the medical information there is also going to be fictional.”