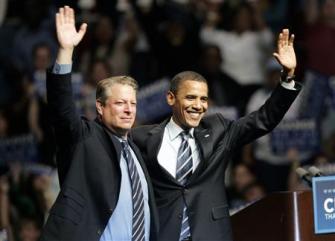 Gore endorsing Obama for the Democratic nomination during the primary campaign.

Standing on stage before a national TV audience at Mile High Stadium, Al Gore was a symbolic reminder of what could have been. He also delivered perhaps the best negativenarrative about McCain of the convention. “I believe in recycling, but recycling Bush’s policies is ridiculous,” Gore told the 70,000 strong crowd.

Yet as I noted last week, what might be good for the convention and the Democratic party is probably not good for Gore’s tireless work to mobilize a diversity of Americans on climate change. Indeed, when it comes to his mission of waking Americans up to the global warming problem, Gore just sent the strongest signal to date that the issue can easily be re-interpreted through a partisan lens.

Related
Health
Could getting rid of old cells turn back the clock on aging?
More work is needed before declaring the technique a fountain of youth.
Thinking
Trimurti: Meet the “Holy Trinity” of Hinduism
Hinduism emphasizes the journey, whichever path that takes. And it holds us responsible for our own self-improvement.
The Past
Riddle solved: Why was Roman concrete so durable?
An unexpected ancient manufacturing strategy may hold the key to designing concrete that lasts for millennia.
13.8
Quantum superposition begs us to ask, “What is real?”
Quantum superposition challenges our notions of what is real.
Measuring Impact
15 research-backed benefits of employee training
The benefits of employee training are felt far and wide, from improvements in workers’ wellbeing to better customer interactions.
Up Next
Guest Thinkers
2004 Redux: A Democratic Convention Without a Message?
“Well, if this party has a message it has done a hell of a job of hiding it tonight I promise you that,” James Carville said on CNN Monday night […]