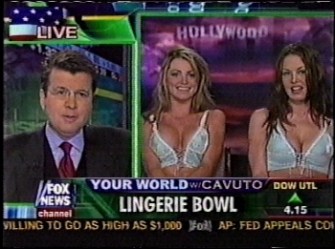 In case you were wondering, why in an era of extreme media fragmentation, polls show that Republicans rank global warming as less of a priority than flag burning or the estate tax (Pew 2006, slide #22), the following comes my way via the email updates from the Center for American Progress and Think Progress:

This past month, Denver, CO, was blanketed by two snowstorms, dumping approximately two feet of snow on the city during the holiday season. The right wing is now using these blizzards as evidence against climate change. Yesterday, climate skeptics Pat Michaels and Dan Gainor appeared on Fox News’ Your World with Neil Cavuto to argue that the recent snowstorms in Denver prove there is a “Northeast bias” on global warming (Watch Video Here). Both agreed with Cavuto’s claim that if “more of those who support global warming did not live in the East Coast, or more specifically in New York, and were stationed in Denver,” they might be more skeptical of global warming.

Michaels added that “if you believe that warming causes cooling, you’re like my neighbors down in Virginia who think that if you put hot water in the ice cube tray, it freezes faster. It doesn’t work that way.” The severe blizzards in Colorado weren’t necessarily caused by global warming. But they also don’t prove that climate change isn’t happening. As the concentration of carbon dioxide increases, the frequency of extreme weather events — including snowstorms — also increases. Additionally, the Intergovernmental Panel on Climate Change’s 2001 report notes that “global average water vapour concentration and precipitation are projected to increase during the 21st century.”

It’s true that temperature extremes do probably shape public perceptions of global warming, and as I noted in a past post, at least one study finds that the media agenda is affected by local weather variations. Moreover, in a few leading examples, like the much talked about Time magazine cover story from this past summer, journalists have used extreme weather events to dramatize the climate change story, employing the hotly debated “Pandora’s box” instead of the “invisible middle” package. Yet, needless to say, it completely distorts the climate change discussion to move way to the opposite extreme and to use a blizzard to argue that concern over the issue is overblown.