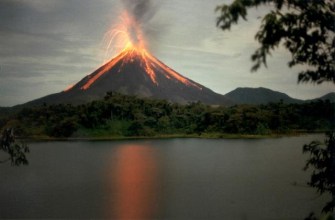 Today, I saw a report that a dome on Arenal in Costa Rica had collapsed last Friday (report in Spanish, but good picture of the event), producing a block & ash flow that left a 800-meter scar on the volcano‘s flank. No one was injured during the avalanche, but tourists were evacuated as a precaution. There have been minor rock fall related to the andesite lava that has been erupting over the last year, but apparently this is the first major avalanche.

This shows the fine line between an effusive (lava flow dominated) eruption and explosive (pyroclastic dominated) eruption. Although this avalanche was not an “explosive” eruption per se, it did produce fine ash deposits and hot (juvenile) material was transported downslope in a pyroclastic flow. These block & ash flows occur when the lava (typically viscous – sticky – lavas like andesite, dacite and rhyolite) erupting to form a dome is oversteepened to the point of collapse. This sounds like what happened at Arenal also week. That being said, Arenal is a relatively safe volcano to the point of being a major tourist attraction.