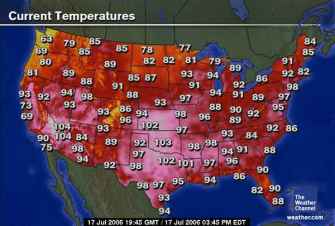 Previously I posted that journalists and news organizations have a “limited carrying capacity,” meaning that they can’t pay attention to all issues all the time, so that when one issue or set of issues rise in attention, other issues are bumped from coverage.

The relationship is relevant as the U.S. faces what has been called a “perfect storm” of foreign policy crises. These foreign policy topics have come to dominate the news over the last few weeks, but for the majority of Americans, perhaps the most salient issue in their daily lives right now is the record heat that stretches across the country.

Indeed, it was just announced that the first half of 2006 was the hottest on record for the continental U.S. And it’s just not the U.S. that is currently experiencing record heat. Great Britain is bracing for 100 degree temperatures this week.

As citizens are warned to stay indoors and as areas like New York City and California experience power outages, do these events lead to increased media attention to global warming, and increased public concern? Understanding the relationship is important in several ways. First, with many competing events, extreme weather can help catalyze media/public attention to global warming when concern might otherwise subside. And second, it is possible that heat waves blur the lines between “weather” issues and “climate” issues in news coverage and in the public’s mind.

As far as I know, only one study has explored this relationship systematically, in this case focusing on the relationship between local temperatures and news attention at The New York Times and Washington Post between 1987 and 1995.

Local temperatures were taken from Ronald Reagan National Airport and Central Park records, and the annual, seasonal, and daily mean temperatures for each city were entered into a database. Media attention was operationalized by the number of words per year, per season, and per day printed at each newspaper in articles focused on climate change, global warming, the Greenhouse effect, or Greenhouse gases.

When shifting the unit of observation from the season to the day, using time series regression techniques, the authors found a significant positive relationship between daily avg. temperature and mean number of words printed per day at The New York Times, but no significant relationship at The Washington Post. At the Times, the authors further explored the data for lag effects, and for differences between “unusually hot days,” defined as 15 degrees hotter than the monthly mean, and “typical days” that fell below the 15 degree cut off. In each case, the relationship between temperatures and more coverage at The New York Times remained.

The authors conclude that while other studies have shown rather convincingly that attention to global warming rises and falls in relation mostly to political events and dramatic focusing events, weather does play a small role, at least at the The New York Times in the years analyzed. Hot weather provides for reporters an entree for discussion, a news peg for returning to the topic of global warming again. Journalists live through the same hot weather that audiences experience, and it is inevitably a topic of discussion in news rooms. Moreover, journalists likely sense that it is an issue that is likely to come to mind among their readers. Telling the story of global warming on a daily basis is a challenge. Hot weather offers a fresh narrative opportunity.

Related
Health
Could getting rid of old cells turn back the clock on aging?
More work is needed before declaring the technique a fountain of youth.
Thinking
Trimurti: Meet the “Holy Trinity” of Hinduism
Hinduism emphasizes the journey, whichever path that takes. And it holds us responsible for our own self-improvement.
The Past
Riddle solved: Why was Roman concrete so durable?
An unexpected ancient manufacturing strategy may hold the key to designing concrete that lasts for millennia.
13.8
Quantum superposition begs us to ask, “What is real?”
Quantum superposition challenges our notions of what is real.
Measuring Impact
15 research-backed benefits of employee training
The benefits of employee training are felt far and wide, from improvements in workers’ wellbeing to better customer interactions.
Up Next
Guest Thinkers
TEN YEARS AFTER DOLLY: Less Than a Third of Americans Believe Cloning Animals is Morally Acceptable; Only a Third of Americans Are Clear About the Differences Between Therapeutic and Reproductive Cloning; Less Than a Majority Support Therapeutic Cloning
Today marks the ten year anniversary of the birth of the cloned sheep Dolly, and the anniversary comes as Congress debates various bills impacting funding for embryonic stem cell research […]