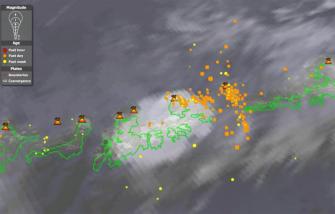 This article sums up a lot of the events that led up to the Kasatochi (Alaska) eruption last week from the point of view of the biologists on the island itself right before it erupted. There are some great descriptions of the whole island shaking for 10 minutes, and they also offer some exciting new details such as this:

“Jeff Williams, a biologist for the maritime refuge, sailed by the island on the refuge boat the Tiglax and said the island has a new shape; what were steep cliffs rising from the ocean on the island’s east and west sides now appear to be long, gradual slopes.”

That would imply to me that the eruption has produced a lot of pyroclastic material that now lies as an apron of material around the vent – much like a river delta or alluvial fan of volcanic material. Most likely, this material will be quickly eroded if it is merely piles of loosely consolidated pumice and ash, but at least for the time being, Kasatochi has added some valuable oceanside real estate to the island.