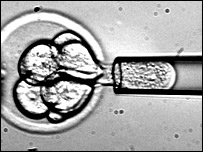 BBC NEWS CAPTION: “There is heated debate about the ethics of using stem cells”

What’s wrong with this picture and caption?

As the BBC reports the horrifying discovery that healthy babies in the Ukraine may have been killed for body parts, including stem cells derived from bone marrow, the news organization also runs a photo and tagline implying that the scandal involves embryonic stem cells.

Even more confusion is featured at conservative news sites like LifeSite.Net:

Ukraine has long heralded itself as a leader in modern science’s embryonic stem cell quest. BBC News reports that video footage they obtained suggests that the Ukraine is no longer meeting the demand with just embryonic stem cells but is now also killing newborn babies to harvest cells from their more developed bodies.

The horrific revelation presents a potential nightmare scenario for research advocates. Both the public and the mainstream news media are likely to confuse the difference between this scandal and the debate over using stem cells from discarded embryos…..and conservatives are going to have a field day, working overtime to amplify the confusion.

Stem cell advocates, scientists, and political leaders need to get out in front of this story by calling reporters, getting on TV and radio news, and issuing press statements condemning the Ukraine practice, but drawing a clear, bright line difference between the scandal in the Ukraine and the research going on in labs here in the United States and abroad.

This event is likely to have a bigger impact than the Korean cloning scandal There is enough drama and sensationalism to carry this story in the news for days, if not weeks. Already, the story is the banner headline at the DrudgeReport meaning that it will make media waves over the weekend.

The BBC report also eludes to video.The release of the footage will likely only magnify media and public attention.

The Ukraine story resonates strongly with President Bush’s narrative that embryonic stem cell research ‘crosses a moral threshold, or boundary,’ and therefore research, no matter how responsible and careful should be tightly controlled and limited in scope. It also introduces a “Pandora’s box” interpretation: ethically questionable research has mutated into a Frankenstein’s monster which can’t be controlled. Both frames are powerful latent meanings that if connected to real events can lead to a strongly negative public reaction.

The story also fits with a larger narrative arc about the former Soviet Union as a lawless out-of-control society, home not only to rogue KGB assassinations but also “rogue science.”

Nazi science, Soviet science….all the historical allusions will be applied.

This focusing event could be bad, very bad for public opinion.