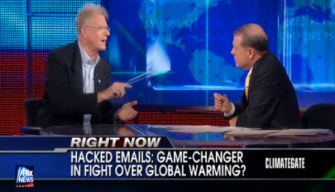 ClimateGate: A now ubiquitous tagline that conveys a preferred storyline.

In a paper published earlier this year at the journal Environment, I explained how claims and arguments relative to the climate change debate can be classified and tracked using a typology of frames that are common to science-related issues.

With the recent controversy over the East Anglia stolen emails, one of these common frames has come to dominate discussion leading up to Copenhagen. What’s different this time around is that climate skeptics and conservatives are applying the frame, rather than liberals and environmental advocates.

This specific frame defines a science debate narrowly in terms of “public accountability and governance”:

Is research or relevant policy in the public interest or serving special interests? The emphasis is on matters of control, transparency, participation, responsiveness, or ownership; or debate over proper use of science and expertise in decision-making (“politicization.”)

In the Environment paper, I described how historically the public accountability frame has been used by Democrats, environmentalists, and science advocates in an attempt to raise concern that conservatives, industry, and the Bush administration were ignoring scientific expertise in favor of economic interests and/or ideology. Common frame devices used to instantly evoke and lock in this interpretation were allegations over a “war on science” and the “manufacture of uncertainty.” As I wrote in the paper, while this frame might mobilize a liberal base it also likely inadvertently leads to further disengagement among the broader public, who are likely to see claims about a “war on science” as just more elite, partisan bickering.

The irony now is that conservatives and climate skeptics have discovered the utility of the public accountability frame to inflame and mobilize their base while also (intentionally) deactivating concern about climate change among the broader public.

The now commonly used term “ClimateGate” to refer to the case of the East Anglia stolen emails is an extremely effective frame device that instantly–if not falsely–conveys that there is wrongdoing, politicization, and a cover-up on the part of mainstream scientists.

Focusing events have the potential to powerfully amplify the resonance of a frame pushed by advocates. If the focusing event imbues a preferred storyline with even a tiny bit of validity, it can catapult a much stronger and broader frame into dominance. The case of the East Anglia emails, now defined in conversation as “ClimateGate,” threatens to follow this trend. We will have to watch closely to see if the storyline cast by conservative skeptics and media becomes one of the classic examples of frame resonance in politics.

For a relevant case study on how an event can launch a politically preferred frame of reference into prominence, see this post from 2005 where I detailed how Hurricane Katrina fueled a larger narrative about the the Bush administration as a presidency in a “state of denial.”

I will be discussing more on this issue at the workshop on climate change communication held Sunday at the annual meetings of the American Geophysical Union in San Francisco. More than 115 attendees have registered and there will be ample time allotted for questions and comments with the panelists.

Related
Health
Could getting rid of old cells turn back the clock on aging?
More work is needed before declaring the technique a fountain of youth.
Thinking
Trimurti: Meet the “Holy Trinity” of Hinduism
Hinduism emphasizes the journey, whichever path that takes. And it holds us responsible for our own self-improvement.
The Past
Riddle solved: Why was Roman concrete so durable?
An unexpected ancient manufacturing strategy may hold the key to designing concrete that lasts for millennia.
13.8
Quantum superposition begs us to ask, “What is real?”
Quantum superposition challenges our notions of what is real.
Measuring Impact
15 research-backed benefits of employee training
The benefits of employee training are felt far and wide, from improvements in workers’ wellbeing to better customer interactions.
Up Next
Guest Thinkers
Environmental Health Perspectives on Framing and Science Communication
The journal Environmental Health Perspectives leads off its December issue with a news feature on the relevance of framing research to science communication. For readers who have followed recent review […]