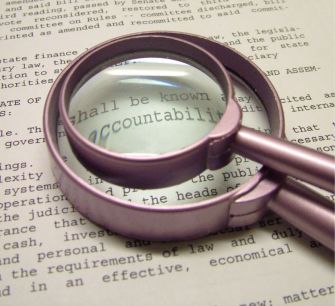 Last week I called attention to the emerging “science audit” movement, a network of engaged citizens who combine their own professional expertise with online communication strategies to demand a greater level of transparency in scientific research and data.

Most prominent on climate change, this movement is likely to grow to include any issue where scientific evidence is claimed as the central criteria driving policy decision-making. Demands for a second-level of inclusive and participatory review of research in areas ranging from nanotechnology to biomedical research to vaccine safety are likely to be at the very center of future science debates.

On climate change, the shift towards greater transparency and public participation in the review of scientific findings is perhaps foreshadowed in last week’s UK Parliamentary report on the CRU emails and also in an English-language version of a Der Spiegel feature article on the surrounding debate. That these arguments are appearing first in Europe and not the United States should be expected, given that Europe is ahead of the U.S. culturally in sponsoring active public participation in decision-making relative to science.

The UK Parliamentary report finds that CRU’s response to requests for the release of raw data were in line with current practices in the climate science field. However, the report recommends that those practices should change to include full release of raw data and methodologies. Specifically, the report notes that “transparency and accountability are of increasing importance to the public, so we recommend that the Government reviews the rules for the accessibility of data sets collected and analysed with UK public money.” The report also notes that the traditional process of peer-review is unlikely to be sufficient to satisfy growing public interest in transparency and accountability. As the report concludes:

…therefore consider that climate scientists should take steps to make available all the data used to generate their published work, including raw data; and it should also be made clear and referenced where data has been used but, because of commercial or national security reasons is not available. Scientists are also, under Freedom of Information laws and under the rules of normal scientific conduct, entitled to withhold data which is due to be published under the peer-review process. In addition, scientists should take steps to make available in full their methodological workings, including the computer codes. Data and methodological workings should be provided via the internet. There should be enough information published to allow verification.

The Der Spiegel article is wide-ranging and worth a full read. While organized around a conflict frame typical of political reporting, the article also provides substantive context on some of the disagreements among scientists over climate-related impacts such as those from hurricanes and sea level rise.

An additional central theme is the focus on maintaining public trust and confidence in climate science. On this, climate scientist Hans von Storch proposes the need for a virtual revolution in how citizens–including skeptics–are included in the review of scientific findings:

German climatologist Hans von Storch now wants to see an independent institution recalculate the temperature curve, and he even suggests that the skeptics be involved in the project. He points out, however, that processing the data will take several years.

“There is no other way to regain the trust that has been lost,” he says, “even if I’m certain that the new curve will not look significantly different from the old one.”

And if it does? “That would definitely be the worst-case scenario for climatology. We would have to start all over again.”

Other central predictions of climatologists, such as that involving a noticeable rise in sea levels, would also have to be reevaluated. How high sea levels will go in the future is already a matter of debate.

One of the reasons why such unprecedented transparency is needed is the way that some scientists have used the scientific evidence to argue narrowly in favor of specific policies, in the process potentially exaggerating the certainty and even the risks of climate change. As von Storch describes later in the article:

Critics say that the climate impact researchers have gone too far with their brand of political advice. “The two-degree target has little to do with serious science,” says Hans von Storch. Many of his fellow scientists, he adds, now see themselves too much as political activists who want to get something done. This, in turn, harms the credibility of science as a whole, he adds, and it is also a more deep-seated cause of the Climategate affair and the sloppy work on the IPCC report.

“Unfortunately, some of my colleagues behave like pastors, who present their results in precisely such a way that they’ll fit to their sermons,” says Storch. “It’s certainly no coincidence that all the mistakes that became public always tended in the direction of exaggeration and alarmism.”

Related
Health
Could getting rid of old cells turn back the clock on aging?
More work is needed before declaring the technique a fountain of youth.
Thinking
Trimurti: Meet the “Holy Trinity” of Hinduism
Hinduism emphasizes the journey, whichever path that takes. And it holds us responsible for our own self-improvement.
The Past
Riddle solved: Why was Roman concrete so durable?
An unexpected ancient manufacturing strategy may hold the key to designing concrete that lasts for millennia.
13.8
Quantum superposition begs us to ask, “What is real?”
Quantum superposition challenges our notions of what is real.
Measuring Impact
15 research-backed benefits of employee training
The benefits of employee training are felt far and wide, from improvements in workers’ wellbeing to better customer interactions.
Up Next
Guest Thinkers
Slate: More Science Won’t Solve Climate Change Gridlock
Daniel Sarewitz, professor of science policy at Arizona State University, has an important op-ed at Slate today explaining why if we continue to frame the climate change debate in terms […]