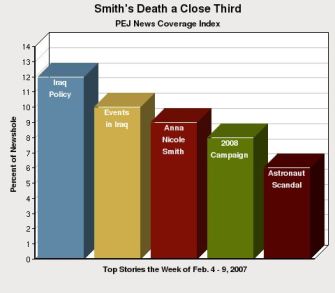 Just how tough is it to sustain news and thereby public attention to the problem of global warming? Exhibit A: The week after the release of the IPCC report, the issue failed to even crack the top five news stories of the week, as tracked by the Pew Project for Excellence in Journalism. The death of Anna Nicole Smith and the murder plot involving a love triangle of astronauts bumped climate change from top five news agenda status.

Even this week, as shareholders organize to demand companies address the problem; British PM Tony Blair announces that he is focusing the remaining months of his term in office on reaching a new international accord on climate change, Blair meets in Berlin with German PM Andrea Merkel who says she will focus her EU and G8 presidency on climate change, and the AAAS meetings kick-off in San Francisco with a heavy focus on the issue, climate change is once again likely to remain a second-tier agenda issue.