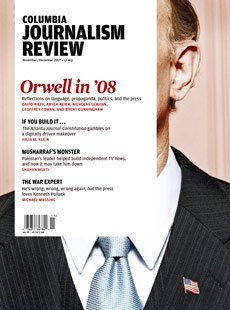 At the Columbia Journalism Review, managing editor Brent Cunningham argues for a new journalistic beat that covers the obscuring uses of language and messaging in politics. The essay is part of a special issue devoted to “Orwell in ’08.”

The benefits of a “rhetoric and framing” beat would be obvious and sorely needed, as he asks:

What if on 9/11 our major media outlets had employed reporters whose sole job it was to cover the rhetoric of politics–to parse the language of our elected leaders, challenge it, and explain the thinking behind it, the potential power it can have to legitimize certain actions and policies and render others illegitimate?

To add to Cunningham’s example, imagine if fifteen years ago media outlets had employed reporters whose sole job it was to cover the rhetoric and strategic framing of climate skeptics? Or what if, as I argued with Chris Mooney in a 2005 cover story at the Columbia Journalism Review, reporters from this beat had been available to file stories on the intelligent design movement, syndicating articles to local newspapers in evolution battleground states where “false balance” was the norm rather the exception?

Cunningham provides an accurate definition of framing and is careful to not rule out all applications of the communication technology since framing is unavoidable in public communication and journalism. Moreover, when applied responsibly and rigorously framing can be a very effective tool for accurately and honestly engaging the public on complex policy issues ranging from science to poverty. As he writes:

The rhetoric beat could take on both conscious and unconscious framing, but I am more interested in those frames that are built with language that is deliberately made overly vague or euphemistic or difficult to define precisely.

Cunningham then goes on to describe several clear examples of how a rhetoric beat could provide a useful service to readers:

In some cases, once a rhetoric reporter reveals significant problems with a phrase, it may be useful for the newsroom to develop a policy about its use of the phrase and explain that to readers and viewers…

…This beat is sure to be something of a lightning rod in our partisan and hair-trigger political culture, and so it would make sense to utilize a news organization’s Web operation to provide some transparency. Readers could see the sources reporters used to reach their conclusions, for instance, and it could also house a searchable database of words and phrases that had been taken apart. The leap, at this point, would not be so great.

For several years, in my Political Communication course, I have assigned a 2003 essay by Cunningham on “rethinking objectivity.” This latest work is another valuable addition to the syllabus!