In the U.S. over the last couple of decades or so, the outlook on marijuana has undergone a complete paradigm shift. According to the most recent Pew Research Center poll, 61 percent of Americans back legalizing cannabis on the federal level. This goes across generational and to some extent, party lines. Lots more Americans support legalizing medical marijuana, for serious, legitimate illnesses. This new outlook is even filtering down into some unexpected places, such as among a couple of fringe Christian groups. Consider Deb Button. She’s the founder of Stoner Jesus Bible Study.

Button swears she had a deeply fulfilling spiritual experience while high on pot. “I’m sitting in my living room and the cannabis was kicking in at a higher dose, and I could literally feel God,” she told the Los Angeles Times. “I was filled with love, an indwelling of love.” The 40-something Coloradan now holds Bible study in her home, which she’s converted into a “Bud & Breakfast.” Weekly sessions combine cannabis use with discussions on scripture.

Another example is California’s Sisters of the Valley, who are to be the subject of the upcoming documentary, Breaking Habits. The order, founded by “Sister Kate,” grows cannabis and produces medical marijuana products, mostly cannabidiol salves and tinctures, to heal the sick. While not affiliated with any official order, the women wear habits and refer to each other as “sister.” Now, two experts are questioning whether or not there’s an actual, Biblical connection between Christianity and cannabis.

Carl Ruck, a professor of classical mythology at Boston University, is one proponent of this radical theory. “There can be little doubt about a role for cannabis in Judaic religion,” he told The Guardian. Ruck believes that Jesus may have anointed those he healed with cannabis oil, which is referred to in Aramaic as kaneh-bosem (Exodus 30:22-36). Traditionally, this was thought to be the herb calamus. Nine pounds of one of these herbs is used in the recipe.

The ancient Hebrews only anointed the priestly class (and later kings). This practice came from the story of the burning bush, where God instructed Moses on how to make the anointing oil and when to use it. Jesus is said to have broken with tradition by anointing the common people and sometimes when doing so, he performed miracles. Take the passage, “They drove out many demons and anointed many sick people with oil and healed them (Mark 6:13).” Epilepsy could have looked like demonic possession, and CBD—a phytochemical in cannabis, has been shown, anecdotally, to treat it.

Although research into the healing powers of cannabis has been severely restricted by marijuana’s federal classification, cases such as Charlotte Fiji’s, covered by CNN’s Dr. Sanjay Gupta, lend this theory a modicum of credence. The then six-year-old was having up to 300 grand mal seizures per week. After a consistent regimen of CBD oil, Fiji now only has one or two mild ones per month. Ruck says that Jesus and followers doused themselves in the oil, which would’ve been absorbed through the skin. Nine pounds of marijuana would’ve meant a lot of CBD. 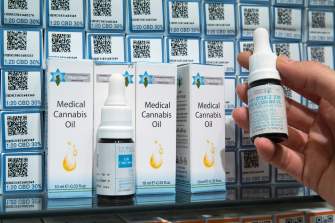 CBD oil is hailed by some for what, anecdotally, is considered its many healing properties. Some experts contend that among the ancient Hebrews, it was only used by the priestly class, until Jesus democratized it. Image credit: Getty Images.

In addition to this, CBD is thought to have anti-inflammatory properties, to lessen pain and calm anxiety. It may even help with eczema and glaucoma, which might be why Jesus is often explained as healing skin and eye conditions. Chris Bennett, the author of the book, Sex, Drugs, Violence, and the Bible, is a supporter of the cannabis oil view. “The medical use of cannabis during that time is supported by archaeological records,” he told the BBC.

“If cannabis was one of the main ingredients of the ancient Christian anointing oil, as history indicates,” Bennett said, “receiving this oil is what made Jesus the Christ and his followers Christians.” Skeptics, and there are many, say the evidence is just too weak. What’s more, while cannabis was widely used throughout the ancient world, so was calamus, which was also revered for its healing properties.

Supporters of this theory would have a long road ahead. First, the medicinal properties of cannabis would have to be proven through vigorous research, which could take years. Then, they’d have to prove that the ancient Hebrew anointing oil did, in fact, contain cannabis and not calamus.

Related
Health
Could getting rid of old cells turn back the clock on aging?
More work is needed before declaring the technique a fountain of youth.
Thinking
Trimurti: Meet the “Holy Trinity” of Hinduism
Hinduism emphasizes the journey, whichever path that takes. And it holds us responsible for our own self-improvement.
The Past
Riddle solved: Why was Roman concrete so durable?
An unexpected ancient manufacturing strategy may hold the key to designing concrete that lasts for millennia.
13.8
Quantum superposition begs us to ask, “What is real?”
Quantum superposition challenges our notions of what is real.
Measuring Impact
15 research-backed benefits of employee training
The benefits of employee training are felt far and wide, from improvements in workers’ wellbeing to better customer interactions.
Up Next
Mind & Brain
Supercomputer Aurora 21 will map the human brain, starting in 2021
Aurora 21 will help the US keep pace among the other nations who own the fastest supercomputers. Scientists plan on using it to map the connectome of the human brain.