Employee engagement is an ongoing struggle for many organizations. Numerous studies from employee research organizations have tied the engagement of employees to higher profits, efficiency, retention, and other benefits. However, as noted by Gallup, over the last decade and a half, “though there have been some slight ebbs and flows, less than one-third of U.S. employees have been engaged in their jobs and workplaces.”

This means that for any given organization, it is likely that only one out of every three workers is actively motivated, enthusiastic, and committed to doing their best. These are the workers who go the extra mile and get things done in the face of difficulty—bringing higher productivity and innovating solutions to the problems they encounter.
The question for many organizations is this: “How can you get as many employees as possible to feel engaged and improve their efficiency on the job?”
Here are a few tips to help answer that question:

1) Shorten the Time Between Employee Achievements and Rewards/Recognition

In a previous Big Think article titled Time to Ditch Year-End Bonuses, the author shares an anecdote from Eric Mosley about the effectiveness of a company’s end-of-year bonus versus smaller, short-term recognition programs: “A human resources executive at a global software company told him that the company’s employee recognition program was much more productive than its annual bonuses. However, the pool of the money for the latter easily exceeded that of the former.”
Although the smaller, short-term bonuses produced better results, the company was still focusing on its year-end bonuses. But, why were the short-term bonuses more effective for increasing engagement and productivity?
One reason may be that the sheer time lapse between an employee completing a task and receiving the year-end bonus is so large that it strips the meaning from the reward. In other words, the reward and the act are so far apart that they become disassociated in the worker’s mind—reducing the effectiveness of the reward as a motivating factor.
So, rather than giving workers one big reward at the end of the year, consider spacing out rewards into smaller, more frequent chunks based on employees meeting specific goals or making other significant contributions to the organization at large.
This makes rewards more immediate to workers, increasing their effectiveness as a motivating factor. Bonuses are something that can help pay the rent every month of the year—not just some far-off thing that they may not even earn if their performance isn’t deemed good enough year-round.

2) Consider Alternatives to Money as Rewards

Money isn’t always the best motivator for encouraging employees to up their performance. While it can be effective for some, there are other rewards that can actually work better because they may be more compatible with an individual’s values/morals.
For example, in a previous Big Think+ blog about managing Millennials, Jeremy Kingsley (author of Inspired People Produce Results) states that, “this generation [Millennials] responds well to encouragement and immediate feedback… Make it clear from the beginning that you reward good work, and then keep an open line of communication to let them know how they’re doing and how they can improve.”
Here, Kingsley is talking about how positive feedback can help motivate employees and inspire them to perform.
Another potential reward that can be given to workers aside from money is the chance for internal mobility within your organization—to be promoted or change departments. This can counter the perception of career stagnation on the part of the employee. Additionally, this can be used as part of a leadership development initiative to groom employees with the right aptitudes for a leadership role.

3) Don’t Overload/Interrupt Employees with Too Many Simultaneous Tasks

Multitasking is a myth. People really cannot focus on two different complex tasks at the same time and be giving either the attention it really needs to be successful. As pointed out in an Inc.com article on the subject of multitasking:

“In fact, research also shows that multitasking, i.e. trying to do two cognitive things at the same time, simply can’t be done–the mind doesn’t work that way. Even trying to parallel path a cognitive activity and a more automatic activity doesn’t really work. That’s why the National Transportation Safety Board reports that texting while driving is the equivalent of driving with a blood-alcohol level three times the legal limit.”

What most people actually end up doing is “task-switching.” This means they’re switching their focus back and forth between two tasks at an exceptional speed. However, whenever one task is being focused on, the other is being ignored.
As a result, there’s always a small amount of ramp-up time each time the focus is changed as the person gets into the right frame of mind for the other task. This slows down the speed at which people can process information and delays reaction times—which is why the NTSB finds texting while driving to be as impairing as being extremely drunk.
In a work environment, attempting to make people multitask simply slows down the speed at which they can accomplish those same tasks handled one at a time as they continuously switch focus over and over. Research cited by the Inc.com article states that “up to 40 percent of productivity could be lost due to task-switching.”
Forcing workers to continuously disrupt their routines to focus on a new task, or requiring them to juggle multiple tasks at a time, can become a stress and frustration factor that saps their engagement and reduces efficiency. So, one way to boost engagement is to let employees focus on one major project or work task at a time and progress it to completion—boosting engagement by letting employees engage with the task at hand and not distracting them.

4) Make Sure Managers Know How to Communicate with Their Teams

Employee engagement can be made or broken by the ability of leaders to communicate with their teams. A good leader who can clearly communicate goals, be a good listener for their teams, and negotiate with others effectively when conflicts arise stands a much better chance of engaging workers and improving team efficiency than one who does not.
Effective communication helps make sure that your teams are able to engage with their work and avoid misunderstandings that sabotage efficiency of time, labor, and materials.
Of course, making sure that the leaders in your organization have strong communication skills takes time and effort, but there are resources that can help with this.
Adapting to these engagement processes will help ensure that you’re doing all you can to boost your team’s happiness and productivity.

Sign up to receive new research and insights every Tuesday.

Related
Measuring Impact
15 research-backed benefits of employee training
The benefits of employee training are felt far and wide, from improvements in workers’ wellbeing to better customer interactions.
L&D Strategy
5 key components of an effective learning and development strategy
Crafting an effective learning and development strategy can be challenging. Here are five key considerations.
Empowering Growth
Critical thinking training: 5 key lessons for employees
From honing the art of perception to checking cognitive biases, here are a few techniques employees can learn in critical thinking training.
L&D Strategy
Peer mentoring in the workplace: 10 benefits and best practices
When organized effectively, peer mentoring programs can offer substantial benefits for organizations and their employees.
L&D Strategy
Transfer of learning: The necessary step to make learning stick
Without a solid understanding of the factors that affect the transfer of learning, the gulf between training and job performance is difficult to bridge.
Get Big Think+
for Your Business

From complex decision making to emotionally intelligent leadership, these dynamic learning programs are short-form, mobile, and designed to help organizations get smarter, faster. 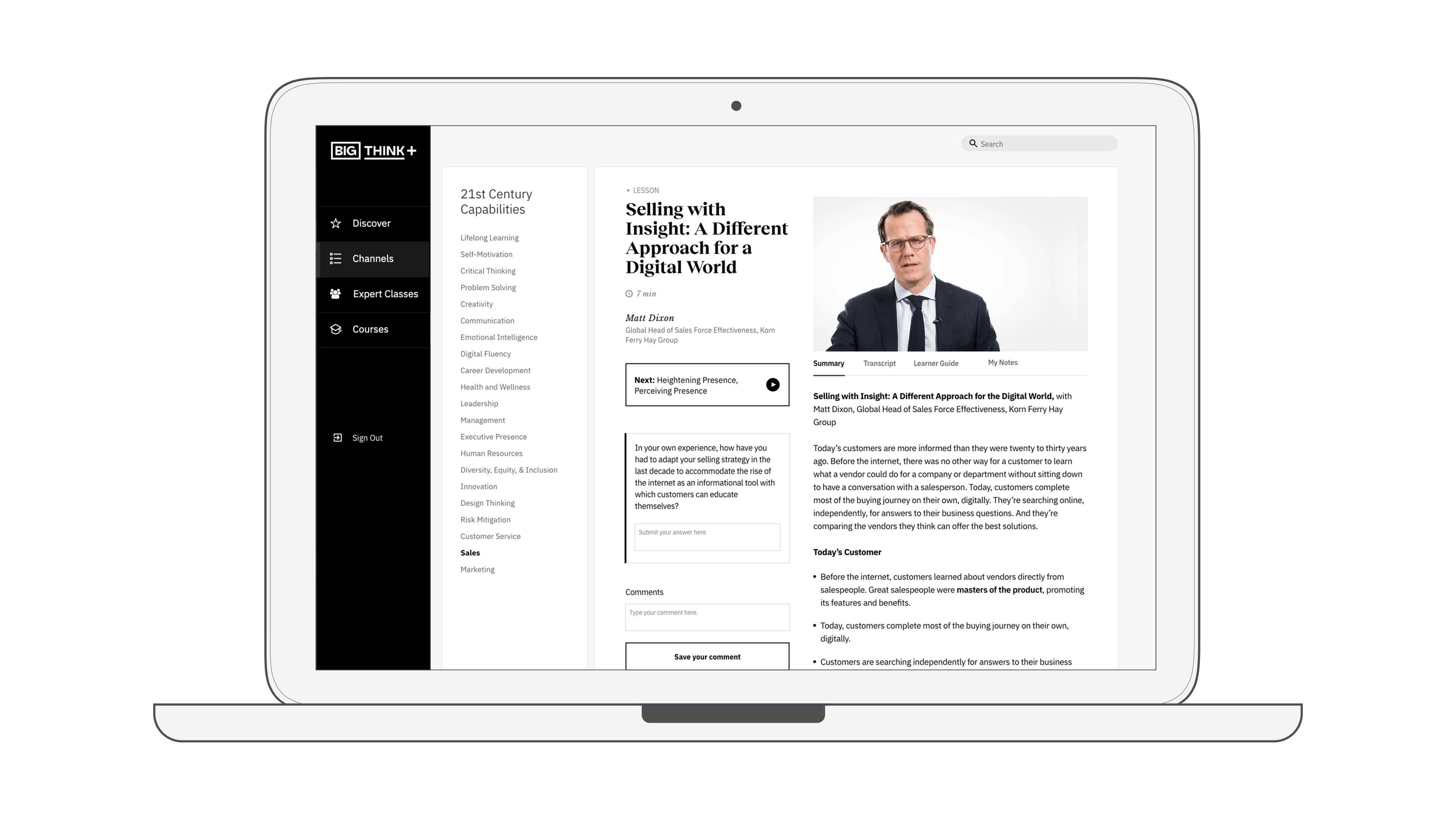